"The Coast of West Florida and Louisiana", Jefferys/Laurie & Whittle 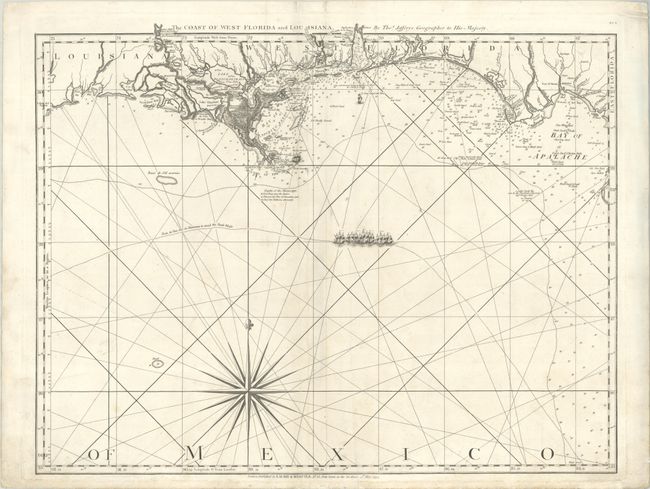 Publication: A New Edition, Much Enlarged of the Second Part of the North American Pilot

This is the western sheet of a 2-sheet map of the Gulf Coast and Florida. First published in 1775, this chart was one of the most important maps of Florida, being the earliest relatively accurate map of the region. The hydrographic detail of the coastline and the channels is excellent and it remained the standard sailing chart for the Florida seas during the last part of the 18th century. This sheet shows the coastline from Cabo del Norte, Louisiana, through Apalachee Bay, Florida. Detail is primarily confined to the coastline with harbors, inlets, bays, river entrances, soundings, rocks, shoals, and currents carefully noted. Several forts, settlements, and villages are located. The map is ornamented with a dramatic compass rose, rhumb lines, and a fleet of sailing ships marking "From la Vera Cruz to Havanna to avoid the Trade Winds." In the second state, the bay at the mouth of the Mississippi River was updated and named "Bay of Spiritu Santo;" this is the third state with the imprint of Laurie & Whittle at bottom. Sheet number DF.3 printed at upper right.

A sharp impression on a bright sheet with a large Strasburg Lily watermark, minor soiling, a couple of extraneous creases, and short edge tears that have mostly been repaired.