A Rare Map of Brazil from the Santa Teresa 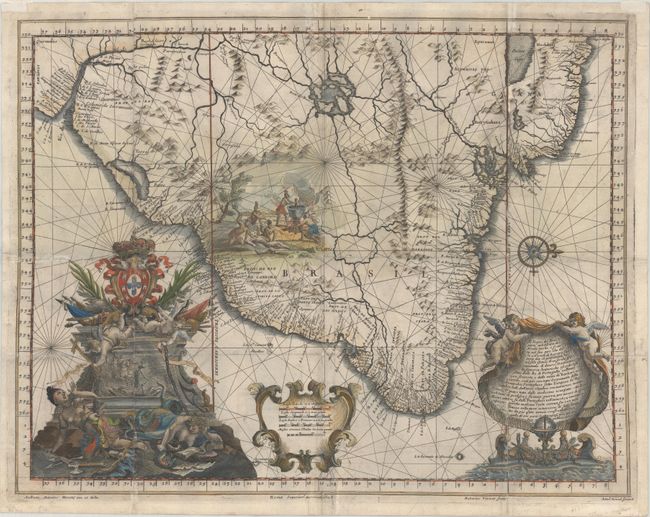 This splendid map of the Brazil, including portions of neighboring countries, was one of 23 maps from this rare account of the Dutch-Portuguese colonial war. Written by Joao José de Santa Teresa, and known among bibliophiles as the Santa Teresa, it is considered one of the most sumptuous 17th century works on Brazil. Santa Teresa, a Portuguese Carmelite spent twelve years in the Jesuit missions of South America and then returned to Europe where he became librarian of the college of the Jesuits in Rome. His account was heavily subsidized by Pedro II of Portugal, and some of the period's leading artists and engravers, including Antonio Horacio Andreas, were engaged to work on the project. It was published by Giacomo Giovanni Rossi.

The map itself is beautifully drawn and provides excellent detail of the coastlines of Brazil, Argentina, Uruguay, French Guiana, Suriname and Guyana from Rio de la Plata in the south to beyond the mouth of the Amazon river in the north. Despite what little was known of the interior of Brazil during the time period, the interior is filled with mountains, rivers and the fictitious Porto dos Reis in Brazil and Lake Parime in Guyana. A large compass rose orients the map with north to the right. The map is elaborately adorned with two cartouches, a vignette of cannibalism, and an allegorical scene with Brazil's royal coat of arms at top with two putti holding chains restraining Hippolyta, the Amazonian Queen, and Medusa.

A dark impression, issued folding and now flattened and glued onto a folio sheet from another atlas from the same time period. There is some printer's ink residue, light soiling and offsetting, and several small holes and abrasions along the folds with minor loss of image. Remnants of hinge tape on verso.