First Printed Map to Focus on Indochina and the East Indies 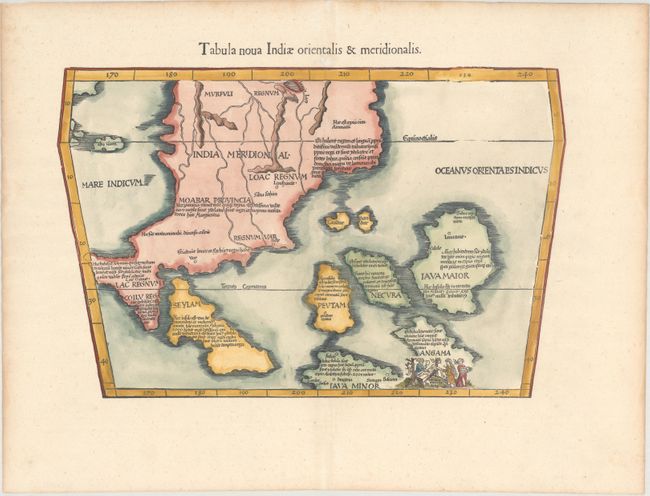 This scarce map is a landmark in the cartography of Southeast Asia - the first printed map to focus on the region of Malaya, Indochina and the East Indies. It was based on Waldseemuller's large 1507 cordiform world map, which was in turn taken from the Martellus model with nomenclature derived principally from Marco Polo. The mythical Lake Chiang Mai, labeled Lamia Lacq, is located at the top border. The islands are placed in a barely recognizable fashion including Iava Maior in roughly the position of Borneo. The map's nomenclature is derived principally from Marco Polo. A small vignette illustrating cannibalism is set in the island of Angama (Andaman Islands), which is totally misplaced to the east of Java. This map was one of three new maps that Fries had engraved for his editions of Ptoelmy's Geographia that were not reduced versions of Waldseemuller's maps. This map first appeared in the 1522 edition of Fries' Claudii Ptolemaei Geographicae.... Blank verso.

This edition was printed by Gaspar Treschel and edited by Michael Villanovus (known as Servetus). Servetus was charged with heresy by John Calvin in 1553, in part due to the text in this atlas. The courts found him guilty and sentenced him to burning at the stake, atop a pyre of his own books, including this atlas.

A nice impression on a clean, bright sheet with expert repairs to a few tiny separations along the centerfold and to two small worm holes - one in an unengraved area of the map at top center and the other just above the top neatline. There is light toning along the edges of the sheet.