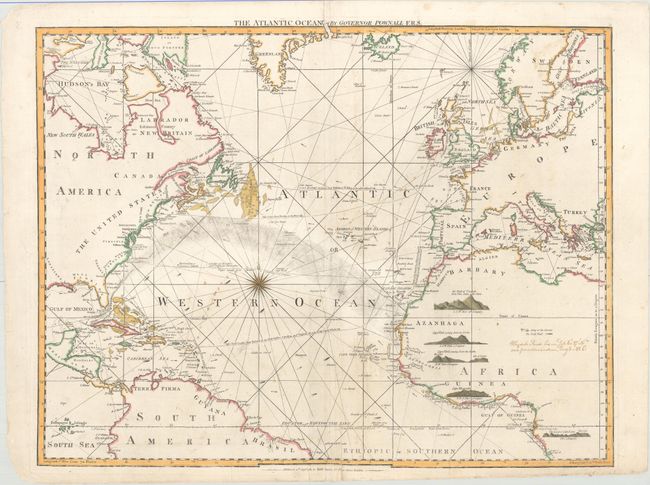 Striking and very scarce sea chart focuses on the Atlantic Ocean and shows coastal detail of Hudson Bay, Greenland, Iceland, Europe, West Africa, the Spanish Main, the Caribbean and the east coast of North America. The sea is meticulously mapped with arrows charting currents, directional lines for winds, and an unusual shaded area to indicate the Gulf Stream, or Florida Stream. This map is one of the earliest to correctly indicate the Gulf Stream, after Benjamin Franklin's famous map of 1786. Franklin was well acquainted with Englishman Thomas Pownall, who created this chart for his Hydraulic and Nautical Observations on the Currents in the Atlantic Ocean, published in 1787.

One of the most interesting features of this chart are the references to the slave trade from the manuscript notations that are contemporary with the creation of the map. There is a note in Africa that states in an abbreviated form: Whydah Road, lies in Lat. 6°, 27' N, and from Norris's Mem. Long: 3° 42' E:. This refers to a book published by a slave trader titled, Memoirs of the Reign of Bossa Adahee, King of Dahomy… A Short Account of the African Slave Trade by Robert Norris, published in 1789. Bossa Ahadee ruled from 1732-74 and was known for his attempts to depopulate Africa by supplying up to 20% of the slaves to the Americas and to Europe through Wydah (shown as Widah on the map). There is also a manuscript route, laid down with aid of a compass that shows the route from Liverpool, where Norris left, to Africa and then the Middle Passage picks up from an established course to the Caribbean, where the slaves would be sold. A previous owner of this map used it to track a slave-trading voyage to Whydah (now called Ouidah in present-day Benin), located at that time in Guinea on the Gold Coast.

There is an edge tear at bottom that extends 1.3" into the map image that has been closed on verso with archival material. The unusual shaded area in the Atlantic is as issued, with some manuscript contemporary to the map - see description.