"A Map of Maryland with the Delaware Counties and the Southern Part of New Jersey &c.", Kitchin, Thomas 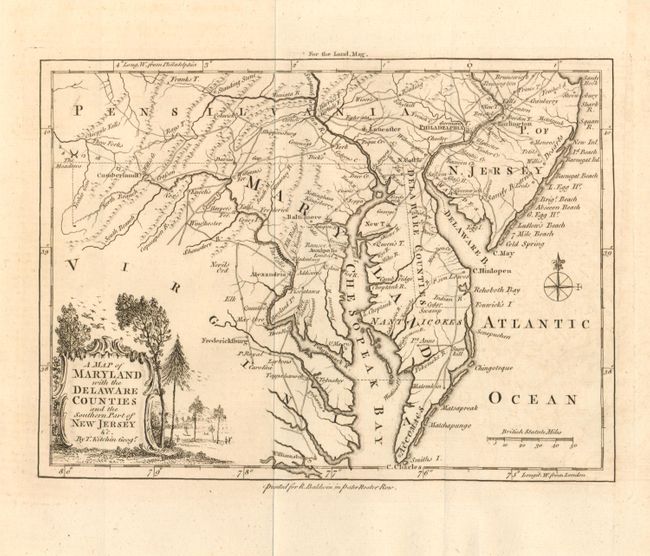 A fine example of this map which describes the Mid-Atlantic region during the French and Indian Wars. Centered on Annapolis the map includes all of Delaware, Maryland and the Chesapeake (here Chesopeak) Bay, with parts of New Jersey, Pennsylvania and Virginia. The map is very crisply detailed with roads, portages, forts, towns and villages, watershed and mountains. A surprising number of wagon roads fill the map, extending as far west as Cumberland Fort. Locates Harper's Ferry, Standing Stone, The Meadows, a town simply called "Dick's", Port Tabacco, several forts and more. In the western frontier there are several settlements including Crasson, Rays T., Enoch's, Nevil's Orchard, etc. The map was printed for R. Baldwin in Pater Noster Row, and appeared in the August 1757 issue of the London Magazine. As was the practice of the day, longitude from Philadelphia is noted at top, and from London along the bottom. The rococo-style title cartouche includes a scene with birds, forest and hunters.

A near fine example on thick hand laid paper with a crisp impression and full margins, folding as issued. A faint suggestion of toning at lower right corner in the Atlantic.