"A Plan of the City of New-York & its Environs to Greenwich, on the North or Hudsons River, and to Crown Point, on the East or Sound River…", Montresor, John 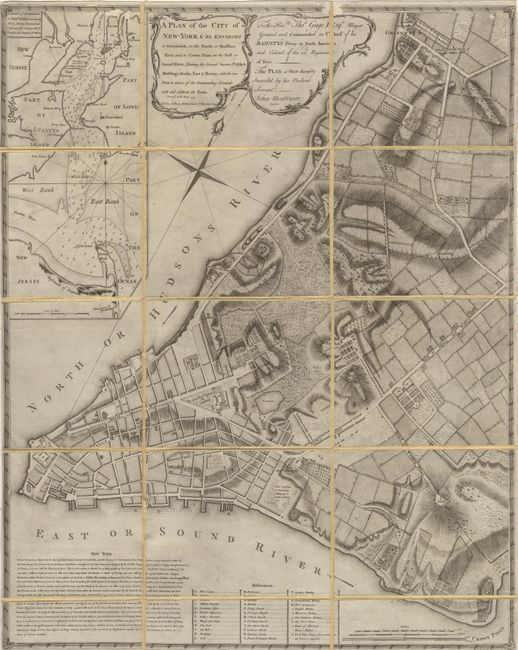 This important and rare Revolutionary Era map of Manhattan is one of the most beautifully executed and detailed plans of any American colonial city. Lt. John Montressor, an engineer in the Royal Engineers Corps and skilled cartographer, prepared the map in the winter of 1766. General Thomas Gage, Commander-in-Chief of British Forces, commissioned Montressor to produce the map. This was during a time of unrest in the population due to the newly applied Stamp Act tax and General Gage felt the need for an accurate plan for potential military use. The survey was conducted in secret resulting in a number of omissions and inaccuracies. Even so, the map is filled with interesting details showing streets, wharves, buildings, fields, gardens, orchards, farms, the names of some residents, industries and windmills. At left is a large inset: "A Chart of the entrance to New York from Sandy Hook, shewing the properest channel for sailing, with ye banks and depth of water." Second state, amended to 1775, engraved by P. Andrews and sold by A. Dury. Dissected and backed on period linen.

Some minor loss of printed surface due to abrasion on top border, else very good with a crisp impression.