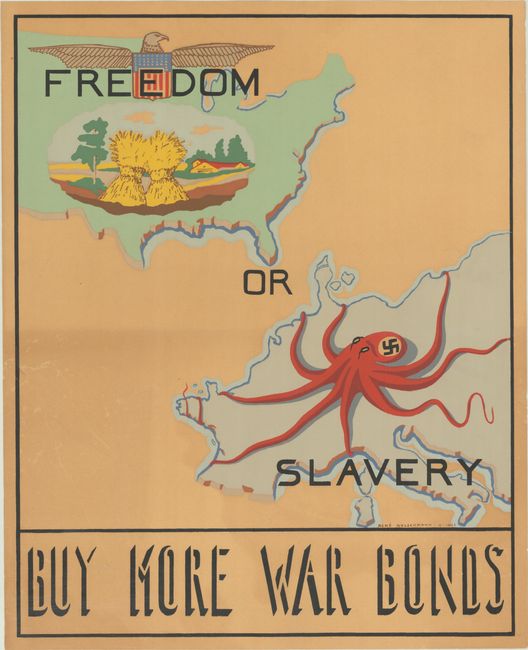 This stark and vivid World War II-era propaganda map is a powerful visual statement against the Nazi threat made even more poignant by the story of its creator, the artist René Golschmann.

Golschmann (d. 1988) was born in Paris to a Jewish family that escaped Russia during the pogroms of the 1890s. Along with three brothers, René found great success in Paris, working as a pearl trader until 1939, when he was conscripted into the French army due to a bureaucratic mistake. Paris fell in June of 1940, just after Golschmann's wife and children boarded a ship bound for the relative safety of the United States. (They were nearly turned away upon arriving, until Golschmann's older brother Vladimir, a conductor of great renown, leveraged his connections to ensure their safety.) Golschmann fled the city for the south of France but was captured along with the rest of his regiment. Since his name did not sound overtly Jewish, he was spared from starvation and death and sent to the Stalag IV prisoner-of-war camp in Prussian Saxony. After nine months of grueling slave labor, he was part of a group of prisoners exchanged for French trucks; the only reason he wound up on the list of prisoners was because he was conscripted in the army by mistake.

Vladimir helped René escape to America by arranging his nightmarish passage on the S.S. Navemar, a Spanish cargo ship that transported more than 1,000 Jewish refugees to America. (As for his other brothers, Jacques and his family survived the war working for the Underground, while Boris and his wife were killed in the Bergen-Belsen concentration camp.) Once he arrived in New York City in September 1941, René found work as an accountant and took classes in English, metalsmithing, and screen printing at the local YMCA. Judging from his work here, he was an exemplary student when it came to silkscreening.

This remarkable poster is the only work of its kind that Golschmann produced. Beyond merely promoting war bonds, it contrasts the promise of America with the fascistic grip of Nazism in Europe. The United States is represented by an eagle with an American flag shield and an idyllic agricultural scene suggesting tranquility and plenitude. Europe, on the other hand, is depicted in the grip of a red octopus with a swastika on the side of its head. Potent and unambiguous, this rare and stunning piece of persuasive cartography came from the Golschmann family's private collection.

There is some light toning in the lower half of the image and a couple of archivally repaired short edge tears at left. Some minor surface abrasions and a few soft creases are visible at lower left.