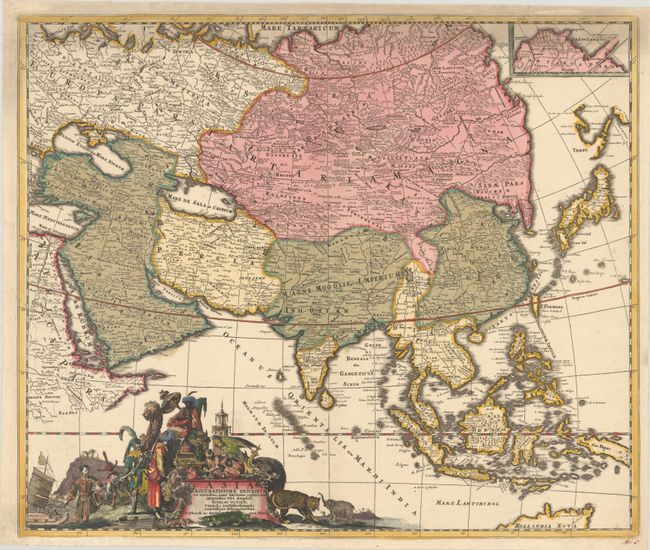 This fascinating and rare map is based upon the work of Nicolaas Witsen (1641-1717) who was a Dutch cartographer, authority on shipbuilding, administrator of the VOC, and served as mayor of Amsterdam multiple times. Witsen traveled to Moscow in 1664-65, keeping a diary and collecting artifacts. He became fascinated about Russia and obtained all information available at the time on the subject, including maps, travelogues, manuscripts and objects. In 1692, Witsen published the most comprehensive and authoritative work on Russia and northern Asia, Noord en Oost Tartarye. His updates on Russia, Siberia, and parts of Chinese Tartary are included in this map, which influenced other Dutch cartographers of the time, such as Allard and Danckerts. Some of the cartographic information in this map is borrowed from Frederick de Wit's map of 1661, including the shapes of Korea, Japan and Yedso (Hokkaido), as well as the nearby Staten Landt and Companies Landt. Although the Caspian Sea is still shown in an east-west orientation, Witsen gives it a more defined coastline. An inset map at top continues the northern coastline of Tartaria. The superb title cartouche features Asian merchants and exotic animals, including a cheetah, elephant, camel, crocodile, monkey, and anteater.

A dark impression with full contemporary color in the map and later color in the title cartouche, on a bright sheet with soiling along the top of the sheet and a couple of tiny cracks near the center of the map that have been archivally repaired on verso.