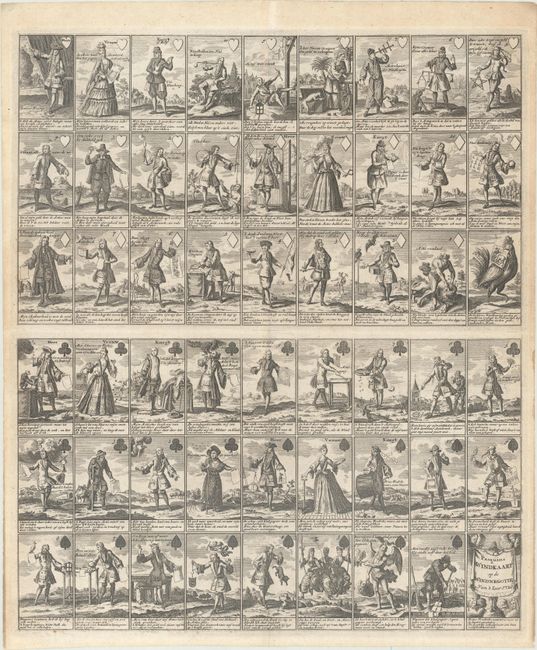 This sheet includes a full set of 52 playing cards from the important account of one the most infamous financial meltdowns in history, known as the Mississippi Bubble incident. The general term Bubble was applied to such schemes and the stock traders were known as "wind salesmen," hence this set of cards is called "wind cards." The cards are arranged in six rows of nine and incorporate the French suit system with hearts, diamonds, clubs, and spades. Each card includes an image and two verses in Dutch lampooning John Law, the Mississippi Bubble scheme, the South Sea Company, and the greed and foolishness of the speculators and investors. John Law himself is represented as the King of Hearts.

John Law, a Scottish financier, established the Banque Generale (central bank) in France. He was then granted control of Louisiana and founded the Compagnie de la Louisiane d'Occident, in 1717. Law developed an elaborate plan to exploit the fabulous resources of the region, which quickly gained popularity and people rushed to invest, not just in France, but throughout Europe. This resulted in the development of several other overseas companies, such as the English South Sea Company and a number of smaller companies in the Dutch Republic. The share prices rose dramatically in a frenzy of speculation. In 1720 the bubble burst; speculators cashed in, caused a run on the shares, and the company went bankrupt. As a consequence of the failure, confidence in other similar companies failed, and thousands of individual investors across Europe were ruined.