"A Map of the Province of Massachusets Bay, and Colony of Rhode Island, with Part of Connecticut, New Hampshire, and Vermont", Lodge, John 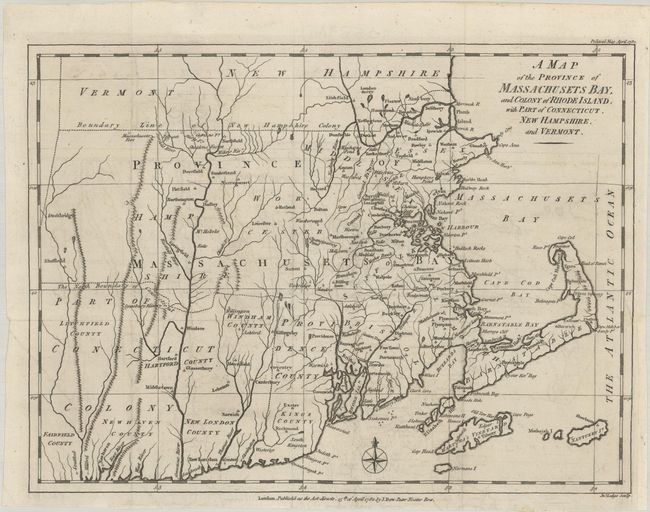 This rare map of colonial New England was published on April 15, 1782, in the midst of the ongoing Revolutionary War. It covers Massachusetts, Rhode Island, most of Connecticut, and parts of Vermont and New Hampshire, extending as far north as Londonderry, NH. Counties and towns are identified, including cities such as Boston, Plymouth, Springfield, Providence, Hartford, and New Haven. Dotted lines define the boundary lines of the Connecticut and New Hampshire colonies. Martha's Vineyard, Nantucket, and other small coastal islands are located. Several forts appear in the northwestern parts of Massachusetts. Vermont is named, but there are no settlements marked within. Engraved by John Lodge. Published by J. Bew. This map is rarely seen on the market; we found only one other dealer record, which claims that it is the first listing in 20 years.

A crisp impression issued folding, now flat, on watermarked paper with minor offsetting. A 1.5" binding tear at right has been professionally repaired on verso.