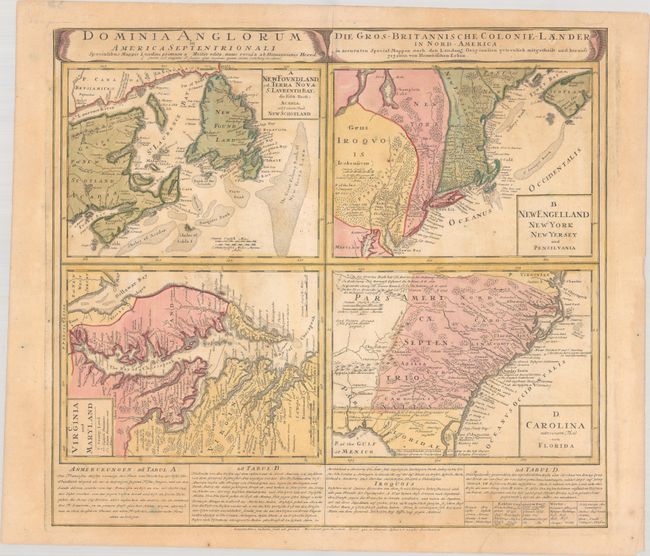 This great sheet consists of four separate maps, each based on the work of Hermann Moll. Each map details the British possessions in North America, with roads, forts, towns, coastal shoals, and more. There is a text panel at bottom with a description of the region and details on the Iroquois Indians.

B. New Engelland New York New Yersey und Pensilvania. This map is based on Herman Moll's postal map of New England. The postal road is shown extending from Portsmouth, New Hampshire along the coast to New York and turning west to Philadelphia. New York is confined to a narrow strip along the Hudson River and New Jersey is divided into West and East New Jersey. A large area along the St. Lawrence River is marked as Iroquois land. Piscataway labels the region of present-day Maine.

C. Virginia und Maryland. This interesting little map of the eastern coast of Virginia, Maryland, and the Chesapeake Bay was taken directly from Herman Moll's map made for Oldmixon's British Empire in America. The map retains the English nomenclature and locates English Plantations and Indian Plantations and Houses as noted in the key, as well as a great deal of other interesting information. Useful notations are included such as "the swamp here not passable."

D. Carolina nebst Einem Theil von Florida. This map details the roads, forts, towns, and coastal shoals between the mouth of Chesapeake Bay to The South Bounds of Carolina according to the last Charter, which is in present-day Florida just south of St. Augustine. It extends inland to just west of the Apalaxy R. (Apalachicola River) and north to two battlefields of the Tuscarora War. The map was based off of Moll's map from Atlas Minor, circa 1729. As in Moll's map, the region of present-day Georgia is labeled Azilia for the aborted "Margravate of Azilia" of Sir Robert Montgomery. Seluda Desert, a remnant of the misconceptions perpetuated by John Lederer is also shown. Many of Moll's notations throughout the map have been translated into German and Latin. Several additions have also been made, including Ebenezer of the Salzb. at the mouth of the Savannah River, and Fort Col Angile (Argyle) near the mouth of the Howgeche (Ogeechee) River.

Contemporary color with light toning, soiling, and a printer's crease at bottom right.