"A Map of the City of Hobart Depicting Its Streets, Parks & Chief Buildings, Some of Its Activities & Beauties Not Forgetting Its "Double Deckers" & Motor Buses as Supplied by the City Fathers", 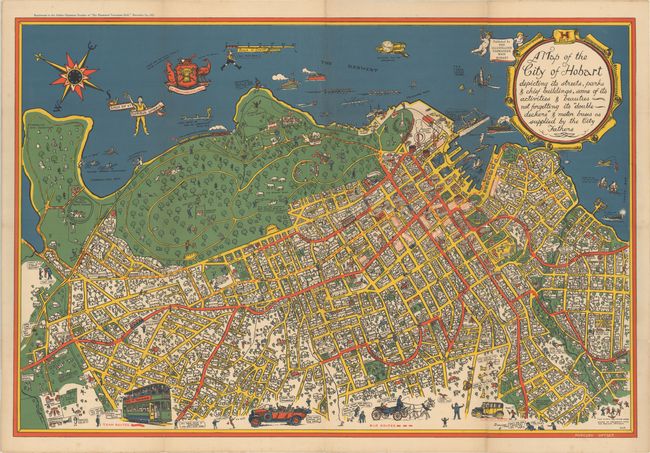 This superb pictorial map was created by Dennis Colbron Pearse for the Illustrated Tasmanian Mail. Presented as a bird's-eye plan with north oriented to the top left corner of the sheet, the map is filled with details of the streets, important buildings, and sites to visit in Hobart, the capital of the Australian state of Tasmania. This map is reminiscent of the style of MacDonald Gill with its yellow streets, three-dimensional buildings, whimsical imagery, and place names listed in banners. Bus routes are shown in red dashed lines and tram routes are identified with solid red lines. The Queens Domain, also known as The Domain to locals, dominates the northeastern portion of the city and houses the botanical garden, Government House and zoo, which was closed in 1937. Other notable local references include the double-decker bus, Tassie, the winning yacht at the 1927 Forster Cup, and St. David's Cathedral. Although social and political commentary is kept to a minimum, Joseph Lyons, the Premier of Tasmania at the time, is noted near the Government House. At bottom right is a fight between motor users and railway officials, and at bottom left a pig on the government farm exclaims, "There's nothing like being in with the government!" Printed by Mercury Offset.

Dennis Colbron Pearse (1883-1971) was born in London and spent his early years in the British Military. He was an early pioneer of the Boy Scout movement and became the second adult to be awarded the "Silver Wolf" honor. After his service in the military he turned to illustrating books, writing articles on scouting, and designing posters for the military during World War I. In 1922 Pearse immigrated to Tasmania, where he helped establish Boy Scout chapters and served several administrative roles for the Tasmanian Chapter. In addition to this map of Hobart, Pearse also created an illustrated Scouting section for the Illustrated Tasmanian Mail. Around the time this map was published, Pearse began working for the Tasmanian Museum and Arts Gallery in Hobart, later becoming the Acting Director of the museum.

This map is extremely rare owing to the fact that at the time of publication the population of Tasmania was around 212,000 with Hobart itself around 55,000, so there were likely not many of these maps produced. We only encountered one institutional listing and one dealer listing for this map.

A clean and bright example, issued folding and now flattened and mounted on heavy linen to repair some fold separations and a few small holes at fold intersections, with minute loss of image and a minor amount of image replaced in facsimile at center.