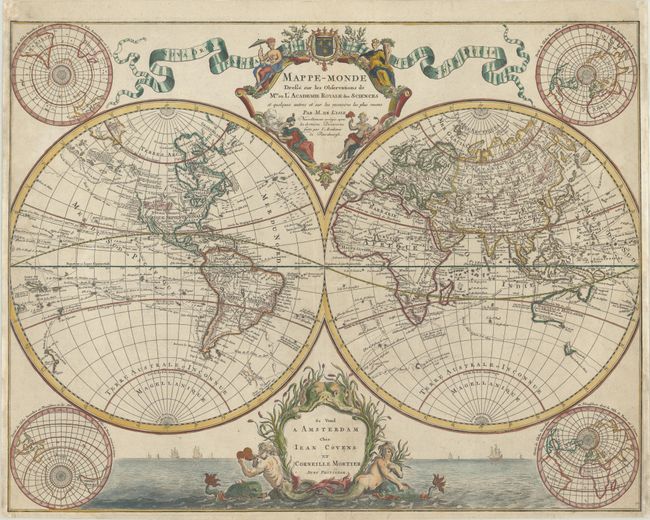 Although the title cartouche attributes this map to Delisle, it is actually a later state of a map by Mortier that was based on Sanson's work, and thus this new connection to Delisle is likely due to the updates that were made to the map. Covens & Mortier have erased the partial coastline of the great Southern Continent, however it still remains slightly visible. Australia, Tasmania and New Zealand are only partially delineated, and Australia is still nearly connected to New Guinea. In the western hemisphere, Greenland is shown attached to Canada, and South America slants too far to the west.

This edition is further updated with the newest information available, including the tracks of major 18th century explorers and their discoveries, including Edmond Halley (1700), Vitus Bering (1741) and Aleksei Chirikov (1741). A number of notations along the western coast of North America, as well as in the North Pacific Ocean, have been added. A new conjectural coastline is now illustrated extending from California up to present-day Alaska, and a River of the West now connects the Pacific to Hudson Bay through a series of lakes and rivers. Some small islands now appear in the North Pacific, including I. de Bering, with a note in Alaska explaining that the people in Kamchatka claim that the land can be seen from Bering Island. These islands in the North Pacific replace the former Terre de la Compagnie, presumably discovered by Don Jean de Gama, which now is only a small island confined to the eastern hemisphere. Updates have also been made along the northern and eastern coasts of Tartary, with Novaya Zemlya correctly shown as an island, Kamchatka taking shape, and improvements made to the depiction of Japan, although Hokkaido has all but disappeared.

The elegantly engraved title cartouche features female representations of the continents balanced by a ribbon-style banner. Covens & Mortier's imprint appears in a decorative cartouche at bottom featuring sea monsters and mer-men, with a lovely seascape and sailing ships behind them. In addition, four polar projections fill the corners of the sheet, with partial outlines of Antarctica shown in the southern projections at left. A very lovely and rare map that features a wealth of cartographic information.

A crisp impression on a sturdy sheet with minor soiling and professional repairs to a centerfold separation and adjacent tear at bottom, and to a tear that extends 2" to the west of South Africa. Professionally remargined at right and left with a portion of the neatline replaced in facsimile.