One of the Earliest Maps of the Whole Continent of Asia 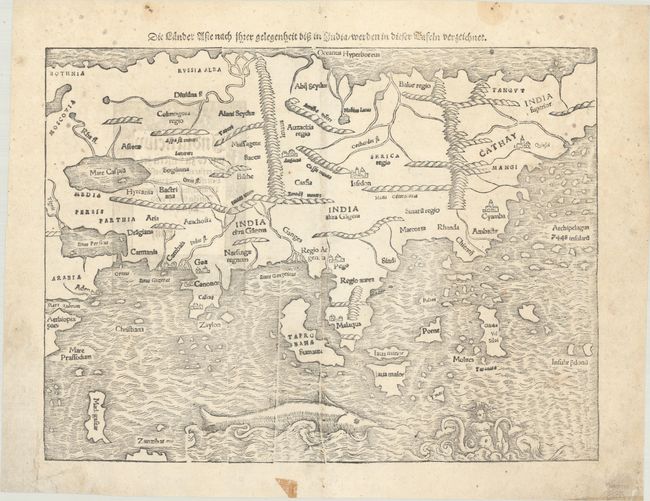 Sebastian Munster (1489 - 1552) was one of the three most renowned cartographers of the sixteenth century, along with Mercator and Ortelius. Munster's Geographia and Cosmographia Universalis were two of the most widely read and influential books of the period. His editions of Ptolemy's Geographia, published between 1540 and 1552, were illustrated with 48 woodcut maps, the standard 27 Ptolemaic maps supplemented by 21 new maps. These new maps included a separate map of each of the known continents and marked the development of regional cartography in Central Europe. The antique geography was a prelude to Munster's major work, the Cosmographia, which was published in nearly 30 editions in six languages between 1544 and 1578 and then was revised and reissued by Sebastian Petri from 1588 to 1628. The Cosmographia was a geographical as well as historical and ethnographic description of the world. It contained the maps from the Geographia plus additional regional maps and city views with nearly 500 illustrations which made it one of the most popular pictorial encyclopedias of the sixteen century.

This map is based on the recent geographical discoveries by Portuguese navigators. The outline of the Asian mainland is relatively well-established, but Munster omits the extreme northeast of Asia, still believed to be joined to the New World. Japan is also lacking, as it appeared on Munster's New World map instead. India appears as a peninsula and Sri Lanka, called Zaylon, is correctly located. Cambaia, Goa and Canonor are all shown, reflecting the Portuguese presence on India's west coast, and this edition names Calicut, unlike the earlier examples of the map. Malacca is correctly located on the Malay Peninsula and the Indonesian island of Sumatra has inherited the name Taprobana from Sri Lanka, but also bears the name Sumatra. Java appears as two islands, Java Maior and Java Minor, shown north of the other. The famed Spice Islands of the Moluccas are located, but oddly shaped. An archipelago of 7448 islands lies off the eastern coastline of China, from the reports of Marco Polo. A huge sea monster and a fantastic two-tailed mermaid preside over the Indian Ocean. German text and woodcut engraving on verso.

The sheet has been fully backed in thin, archival tissue to repair several short tears and tiny worm holes. The woodblock plate shows signs of cracking as evidenced by the white vertical lines at bottom center. There are some spots and stains, mostly confined to the blank margins, and a small remnant of non-archival tape in the bottom blank margin.