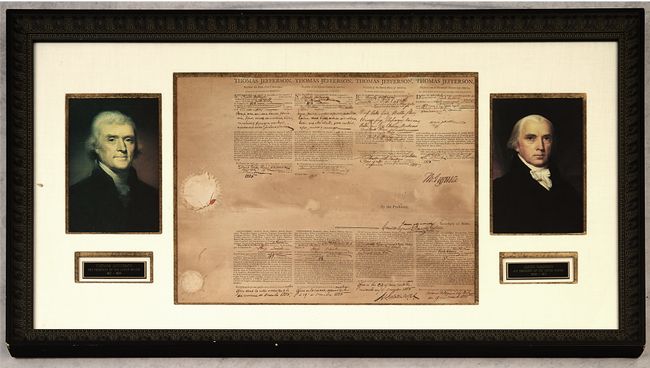 This diplomatic document was boldly signed by President Thomas Jefferson and Secretary of State James Madison and dated December 19th, 1805. It is a four-language sea letter, printed in French, Spanish, English, and Dutch, authorizing the passage of a brig called the Danube from New York to "Trinidad (in Cuba)." According to the letter, the ship was commanded by Charles Hathaway and carried "193 66/95 tons or thereabouts" of "Beef, Pork, Lard, Butter, flour, Wine, figs, Glassware, Hardware, Porter, one Gig. Cheese Nankeens, Dry Goods, Hams, Lumber." Paper seal of the United States and red wax seal affixed at left.

Such sea letters were commonly issued in the early 19th century and were typically signed by the President, the Secretary of State, and the customs collector - in this example, Jefferson, Madison, and David Gelston, respectively. The sea letters officially identified a ship's national origin and cargo and requested fair and neutral treatment for the vessel as it traveled to and from its destination.

The sea letter is matted and framed, with images of Jefferson and Madison flanking the document at left and right. The frame measures 42.3 x 23.8". Provenance: purchased from Heritage Auctions in 2020.

The document was issued folding, now flat, on a toned sheet with some light dampstaining and a 5" tear at top right that has been archivally repaired. A small chip at top has been professionally repaired, with a minute amount of the printed text replaced in facsimile. The larger of the two seals is cracking with small portions chipped away. Frame has minor scuffs, mostly in the corners.