Moll's Large-Scale Map of the World 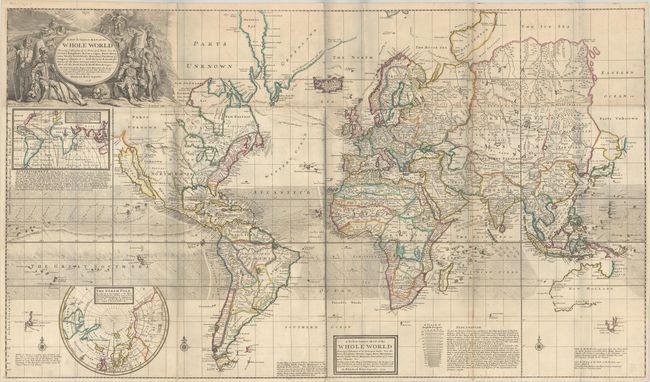 This spectacular map on Mercator's projection is one of the largest world maps ever produced for an atlas. The cartographic details include the prominent insular California and recent discoveries in the South Pacific and northern Japan. There is a large inset of the North Pole depicting the potential regions where either a Northwest, or Northeast, Passage might soon be found. Correspondingly, the tracks of Henry Hudson, Thomas James, Willem Barents, in their search for this elusive northern passage to Asia, are traced on the map. Another inset world map shows the magnetic variations of the compass in the Atlantic and Indian Oceans based on recent English observations with Woodes Rogers' corresponding track through the Pacific shown on the large map. The trade winds and currents are graphically shown in the oceans. The map is filled with fascinating comments and annotations including Moll's advertisement for a new set of maps, in which he warns his clients not to purchase or subscribe to inferior works, such as those of Moses Pitt. The superb title cartouche, designed by Louis Cheron, features allegorical scenes representing Christianity and paganism, and unusual male figures representing the continents: a knight for Europe; a Turkish soldier for Asia; and native warriors for both America and Africa; and a resting, but watchful, lion representing Britain. A secondary title is contained in a rectangular cartouche at bottom. Sold by Moll "against Devereux Court," John King "at the Globe in the Poultrey new Stocks Market," John Bowles "at the Black Horse in Cornhill," and Thomas Bowles "in St. Pauls Church Yard." The map consists of four joined sheets.

A sharp impression with contemporary outline color on bright sheets, issued folding with very light soiling and professionally backed in linen to repair a number of separations along the folds and a few short tears. There are some grayish shadows on the image that do not appear on the map itself - the paper is quite bright and the soiling is very light.