"To Her Most Sacred Majesty Carolina Queen of Great Britain, France & Ireland, This Map of Europe According to the Newest and Most Exact Observations Is Most Humbly Dedicated by Your Majesties Most Obedient Servant", Moll, Herman 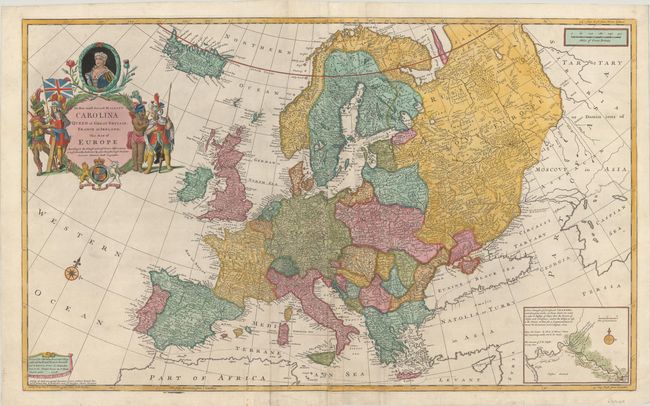 Large-scale maps such as this map of Europe were very popular at the beginning of the 18th century, and Herman Moll's large maps were among the best English produced maps of the period. It shows the current political divisions and is filled with detail. It includes an inset showing the canal built by Peter the Great to connect the Volga and the Don, thus connecting the Caspian and Black Seas. On the main map, a dotted line illustrates the route from this canal through the Black Sea, the Bosphorus, the Aegean and Mediterranean to the Atlantic. The cartouche features the allegorical representations of the four continents, in a rather caricaturistic form, along with the portrait of the queen and the royal arms. This map first appeared in 1708 with a portrait and dedication to Queen Anne. This edition, with the portrait and dedication to Queen Caroline was likely published while she was Queen consort between 1727 and 1737. The imprints of Moll, John Bowles, Thomas Bowles, Philip Overton and John King appear at bottom left. Printed on two sheets and joined.

A sharp impression on brights sheets, issued folding with a touch of soiling and professional repairs to some minor separations along extraneous creases on both sides of the centerfold at bottom. There is a faint manuscript notation near the Shetland Islands.