"Map Showing the Battle Grounds of the Chickahominy, and the Positions of the Subsequent Engagements in the Retreat of the Federal Army Towards James River and All the Other Points of Interest in Connection with the Siege of Richmond...", Sheppard, E. 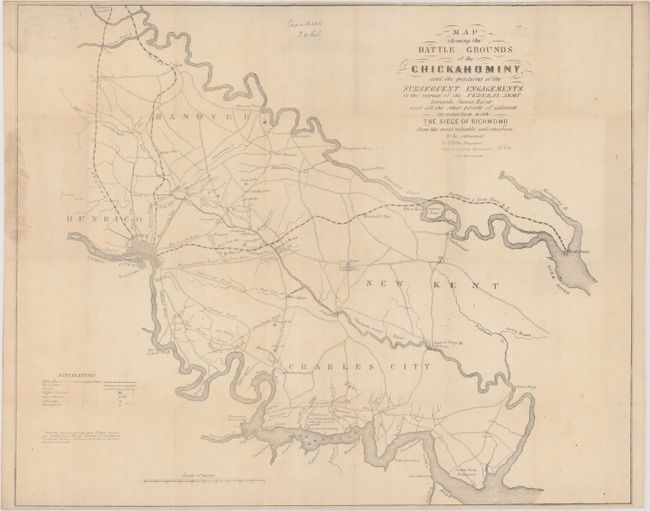 This rare Civil War-era map was created by Edwin Sheppard and published in Richmond, Virginia by Hoyer & Ludwig. It focuses on the 1862 battlegrounds surrounding the Chickahominy River, which served as a major obstacle to the Union Army in their attempt to capture Richmond. The map shows the region between the James and York Rivers, extending west to Richmond and east to the confluence of the James and Chickahominy Rivers. In addition to excellent detail of the rivers, the map shows roads, railroads, battle fields, churches, courthouses, and the locations of landowners. Battles are marked by small Confederate flags and include Seven Pines, Malvern Hill, Gaines' Mill, and others. Below the legend at bottom left is a note regarding Brigadier General JEB Stuart's route through the region as he circumnavigated General McClellan's army.

Hoyer & Ludwig were lithographers in Richmond both before and during the Civil War. Their shop printed maps, ballots, bonds, and stamps, and was the first to receive a contract from the Confederate States Post Office Department. Lewis Hoyer was proprietor of a jewelry shop before partnering with Charles L. Ludwig, who was a native of Germany and immigrated to the United States as a young man, and was known to be working in Richmond by 1856.

Issued folding with light toning, some staining at left, a few small spots of foxing, a couple of pencil notations, and some tiny holes at fold intersections. A previous owner's typed paper label is in the top left corner on verso.