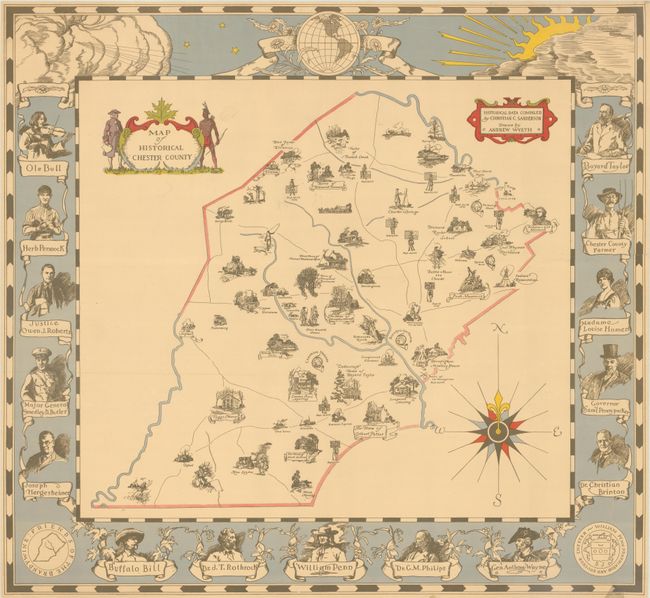 This lovely pictorial map of Chester County, Pennsylvania was illustrated by the great American realist painter Andrew Wyeth (1917-2009). One of William Penn's three original counties of Pennsylvania, Chester County is rich with history. The map's cartography is simple and stripped-down, with the emphasis on the historical vignettes that pepper the landscape, much of them related to the Revolutionary War. The map is adorned with a title cartouche flanked by a colonist and a native, a cartouche crediting Wyeth and compiler Christian C. Sanderson, and a compass rose. It is surrounded by an ornate border where Wyeth's talents really shine. Along the top are a windhead, a globe fixed on the Western Hemisphere, and a setting sun. The sides and bottom of the map feature portraits of 15 notable figures related to Chester County, including William Penn, pro ballplayer Herb Pennock, Supreme Court Justice Owen J. Roberts, Buffalo Bill, General Anthony Wayne, operatic contralto Madame Louise Horner, and a farmer. Sanderson (1882-1966) was a teacher, historian, collector, fiddler, lecturer, and radio personality who lived for a time in the Benjamin Ring House, General George Washington's headquarters during the Battle of Brandywine. He befriended the Wyeth family in Chadds Ford. The map was printed in an edition of 5,750 by the Beck Engraving Company in Philadelphia.

A small chip at bottom right has been repaired with archival materials on verso, with a minor portion of the border in facsimile, and a 5" edge tear at right has also been professionally repaired. There is extraneous creasing and some short tears along the top of the map's decorative border that have been archivally repaired.