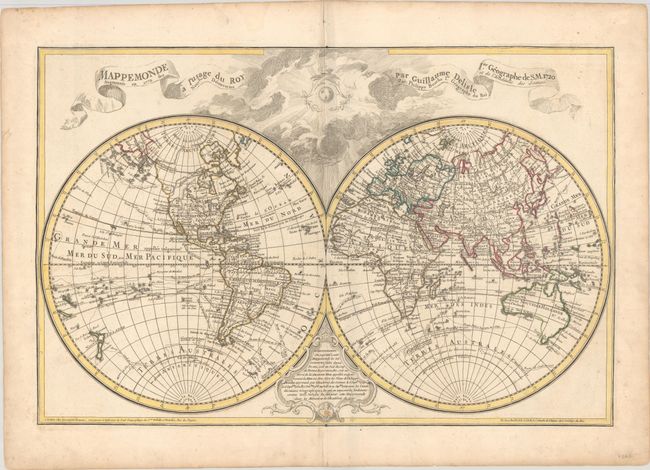 Dezauche, the successor to the Delisle cartographic firm, issued this impressive large, double-hemisphere map based upon the work of both Delisle and Bauche. The map shows well formed continents with the latest discoveries described in the cartouche at bottom. Dezauche has incorporated numerous changes to previous states of this map. The western portion of North America is still largely blank with the exception of a Mer de l'Ouest, which has been reduced in size but is still rather large, as well as a waterway labeled Gr de Eau, which had previously been depicted as a lake, and now is even more suggestive of a Northwest Passage. Alaska is shown in an updated, yet still rudimentary shape based on the discoveries of Captain Cook.

In the eastern hemisphere, Hokkaido is named Ieso and is still misshapen with a conjectural western coastline. Just to the east of Hokkaido are the islands of I. des Etats and T. de la Compagnie, based on the reports of Maarten Gerritsz de Vries in 1643, as well as Kiaytuo ou T. de Gama based on the reports of João da Gama in 1589. Australia and New Zealand are now more fully delineated, although Australia is still attached to Tasmania, and there are a number of changes to the islands in the South Pacific. These changes reflect the discoveries of Captain Cook, whose routes are traced throughout the map, including several landfalls in Antarctica. The routes of numerous other explorers are also depicted, including Magellan (1520), Mendanna (1595), Quiras (1605), Le Maire (1615), Tasman (1642), St. Louis (1708), and Antoine (1710). The large title is in ribbon form, with a sun and clouds covering the upper portion of the map, and a decorative advertisement cartouche at bottom. This is the third state with the addition of the Gr de Eau.

Contemporary outline color with light soiling, a printer's crease at bottom right, and some extraneous creasing along the centerfold.