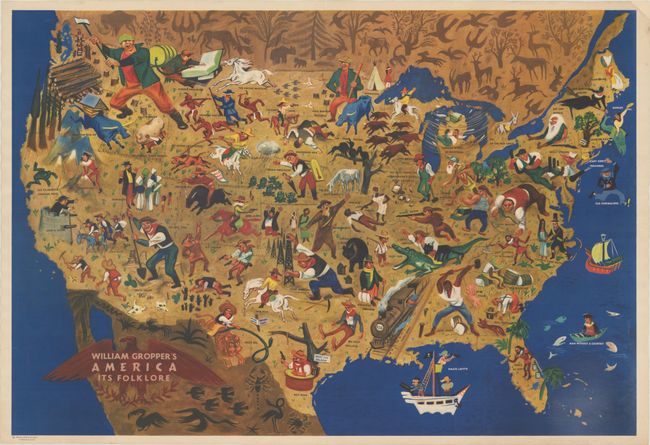 While this colorful, pictorial map began as a quintessential representation of American folklore and culture, it later became embroiled in the anti-communist campaign fueled by Joseph McCarthy. The map was created by artist William Gropper (1897-1977), who made propaganda posters and paintings for the U.S. Treasury Department and the Office of War Information during World War II. In 1945, Gropper made the painting on which this pictorial map was based, which was subsequently printed and published by Associate American Artists as part of a series of three lithographic maps. The map was quite popular and was re-issued in smaller editions in the New York Times, Life, and other journals. In 1946, the State Department’s Overseas Library Program purchased around 1,700 copies of the map to distribute abroad in an attempt to promote the perception of the United States as a welcoming and free land. Indeed the map was quite popular stateside as well, used by teachers and librarians to teach American literature and culture. The map depicts 61 U.S. legends and literary heroes, each carefully labeled, including Daniel Boone, Johnny Appleseed, Paul Bunyon and Babe the Blue Ox, Calamity Jane, Wild Pecos Bill, and even Brer Rabbit. The characters are superimposed on a map of the continental United States with only faint boundary lines between states. Canada and Mexico are filled with shadowy images of native flora and fauna.

The whimsical and pro-American sentiment of the map were later questioned during the "red scare" post-World War II. In 1953, Gropper was subpoenaed to appear before the Senate Permanent Subcommittee on Investigations regarding his alleged communist ties. Although Gropper, a son of Jewish immigrants from Romania and Ukraine, had spend time in the Soviet Union and had contributed artwork to several communist publications, he was never formally a member of the Communist Party. When questioned by the committee, he invoked the Fifth Amendment and was deemed a Communist. Both Gropper and his works were deemed un-American, and the State Department destroyed their remaining copies of his folklore map.

As a result, this map is quite rare on the market.

Issued folding and now flattened and backed in archival tissue. There is a repaired chip at top right, not affecting the image.