"To the Right Honourable William Lord Cowper, Lord High Chancellor of Great Britain This Map of Asia According to ye Newest and Most Exact Observations Is Most Humbly Dedicated by Your Lordship's Most Humble Servant", Moll, Herman 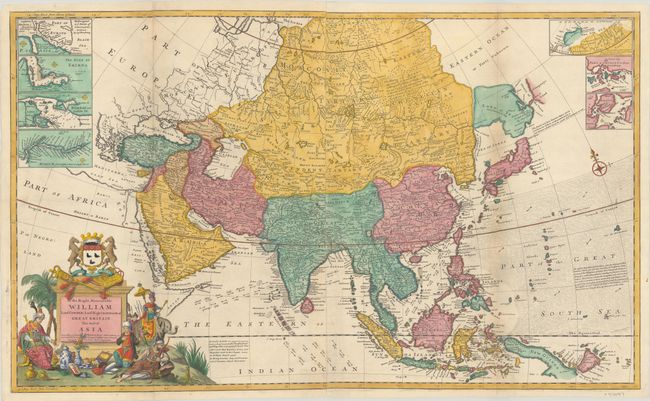 Although based on the "newest and most exact observations," this large format map of Asia depicts numerous geographical inaccuracies. The northeastern border of Asia is truncated, without any trace of the Kamtschatka Peninsula. Moll continues the speculation that Land of Iesso (Hokkaido) might be attached to the mainland and a partial coastline of Company's Land appears further east. The mythical Chaamay L. is shown in southern China with several rivers flowing west and south. The map includes navigational information, including the winds and currents related to the annual Monsoons in the Indian Ocean and the South China Sea. A note in the Pacific mentions an account of the Jesuits regarding the existence of 87 small islands located between the Philippines and the Moluccas, but reasons that since these islands were not mentioned by Dampier, that "we must suspend our belief of this relation." Seven small inset maps of commercially significant locations fill the top corners of the map: Hellespont (the Dardanelles), the Gulf of Smyrna (Izmir, Turkey), Bombay (Mumbai), the Hooghly River, a potential Northern Passage north of Russia, Chusan Island (Zhoushan Island), and Amoy Island (Xiamen). The opulent title cartouche features Asiatic treasures and trade goods, a figure riding an elephant, and a large coat of arms. The imprints of Moll, John Bowles, Thomas Bowles, and Philip Overton appear to the right of the title cartouche. Printed on two sheets, joined.