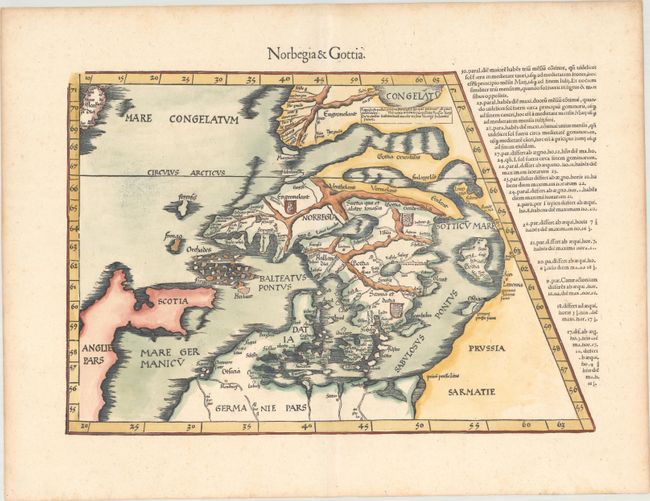 This early woodblock map of Scandinavia is a reduced-sized version of Martin Waldseemuller's map of 1513, which in turn was based on Nicolaus Germanus' map of 1482. Although the region is beginning to take shape, the depiction is more conjectural the further north it goes. Greenland appears to the north, connected to the mainland by a narrow isthmus. In true Ptolemaic fashion, Scotland is shown leaning east into the North Sea. The text to the right of the map explains the remarkable lengthening of daylight hours as one travels further north, which was more pronounced in Scandinavia than in other regions of Europe.

Although Fries' map is a close copy of Waldseemuller's, there are a few notable differences. Due to its reduced size, the map no longer extends west to include Ireland or the Hebrides archipelago. In addition, armorial shields for the Scandinavian kingdoms have been added. Prussia is also now named at bottom right. This edition was printed by Gaspar Treschel and edited by Michael Villanovus (known as Servetus). Servetus was charged with heresy by John Calvin in 1553, in part due to the text in this atlas. The courts found him guilty and sentenced him to burning at the stake, atop a pyre of his own books, including this atlas.

A nice impression on paper with a bunch of grapes watermark and light toning along the edges of the sheet.