"Guadaloupe, Done from Actual Surveys and Observations of the English, Whilst the Island Was in Their Possession with Material Improvements Added Since the Conquest in 1794...", Jefferys/Laurie & Whittle 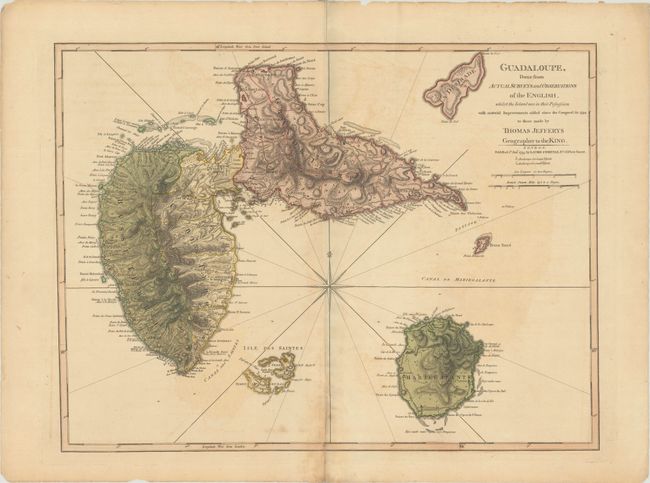 A sharply engraved map with tremendous coastal detail showing dozens of rivers, towns, forts, churches, and military batteries. Interior detail is limited to the expertly rendered topography. A legend below the title identifies anchorages for both large and small vessels. The map depicts Basse-Terre, Grande-Terre, Marie-Galante, and the Iles des Saintes. The island of La Desirade is erroneously shown north of Grande-Terre, rather than to the east. This example has been updated with changes to many towns, roads, rocks, shoals, and anchorages - particularly at the southern tip of Basse-Terre, the the areas around Petit-Bourg and Petit Cul-de-Sac Marin. Published by Laurie and Whittle in a later edition of Jefferys' West Indian Atlas in 1796.

A nice impression on paper with the watermarks of a large fleur-de-lis coat of arms and the initials "RG." There is light offsetting and toning and centerfold separations at top and bottom that have been closed on verso with archival tape. An edge tear at bottom that just crosses the neatline has also been archivally repaired on verso.