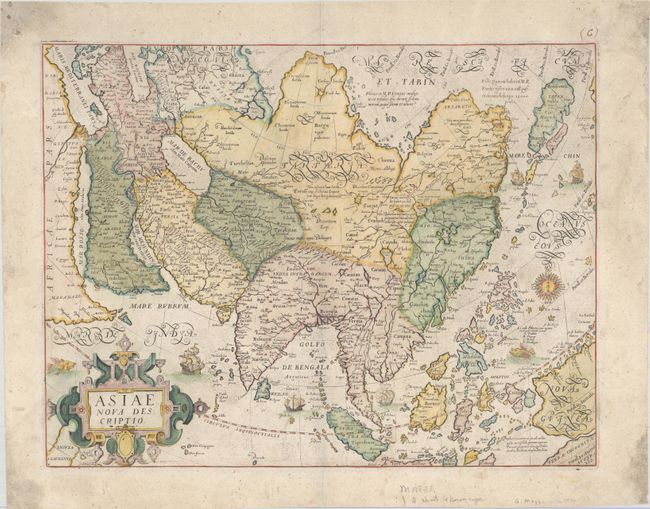 Although in most respects a close copy of Abraham Ortelius' map of Asia, Mazza's map of the continent has the addition of Luzon in the Philippines, and is the first map to accurately depict this island. Mazza's map of Asia is also extremely rare, and we are only aware of 3 examples of this listed on the market over the last 30 years. There is little biographical information on Giovanni Battista Mazza, who published separately issued maps of the four known continents circa 1589, and later engraved Giuseppe Rosaccio's 10-sheet world map in 1597. All of his maps of the continents are extremely rare and are only known in a handful of existing examples.

Ortelius' similar map, which was first published in 1570, was based on his wall map of Asia (1567), which was in turn based on the work of Gastaldi and various other sources. The cordiform projection shows Asia extended too far to the east, an error propagated with Ptolemy. Japan is shown as a huge island with islands trailing behind it in a kite shape in the manner of Ruscelli from Jesuit sources. The mythical lake Cayamay Lacus is located in southern China with six rivers radiating from its shores. There are a great number of islands in the East Indies, but not well placed, due to the secrecy of voyages to the region. In the southeast corner of the map are a large New Guinea and the tip of Terrae Incognitae Australis.

While the similarities abound between Ortelius' and Mazza's maps of Asia, there are a few notable differences in Mazza's map, the most important of which is the inclusion of Luzon. Although the name "Lozon" had first appeared on Giacomo Gastaldi's map of Asia published in 1561, it was depicted as a tiny island northeast of Mindanao, and was based on reports of the existence of the island, rather than actual European explorations. The reports came from the journal kept by Antonio Pigafetta while serving as assistant to Ferdinand Magellan on his exploration of the Spice Islands, which never reached Luzon. The first appearance of the actual island of Luzon in a relatively discernible form is credited to Mazza, who was known to have used as much new information as was available. It is likely that Mazza obtained information from Spanish or Portuguese sources, such as the Spanish expedition to the Philippines led by Miguel Lopez de Legazpi, who is credited with founding the city of Manila on Luzon in 1571.

Mazza also updated the decorations on the map, incorporating four ships (instead of two on Ortelius' map), a sea monster, a compass rose, and a new cartouche. Mazza also added calligraphic writing and a note adjacent to the Moluccas.

On a sturdy sheet with a large "R" watermark and light soiling that is mostly confined to the edges of the sheet. There are several tiny holes in the far corners of the sheet and small remnants of hinge tape on verso.