Map of the Ancient World with Depictions of the Four Elements 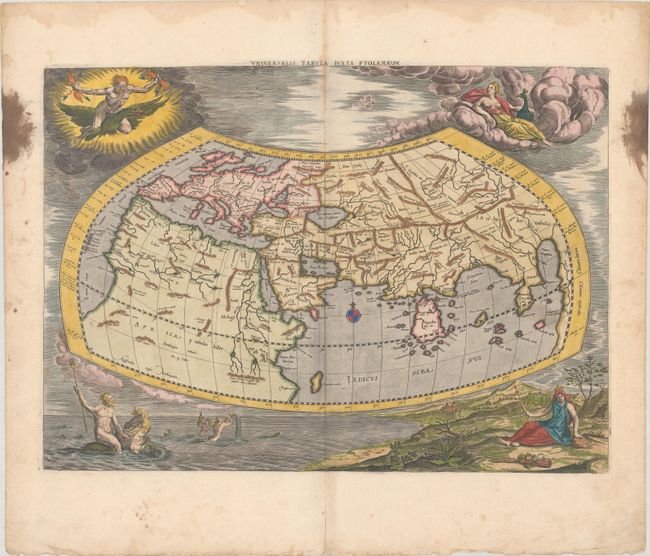 This decorative map of the ancient world is the revised second state of Mercator's 1578 Ptolemaic world map. The border was re-engraved, surrounded by allegorical figures representing the four elements of Fire (Zeus), Air (Hera), Water (Neptune), and Earth (Gaia), rather than the strapwork and wind head border of the earlier edition. There is a very large Taprobana (modern day Sri Lanka) in the Indian Ocean and the Indian subcontinent is severely truncated, though the Ganges is noted. Only the northern part of Africa is shown with the Nile originating in the twin lakes south of the Equator in the Lunae montes (Mountains of the Moon). Published in either Claudii Ptolemaei's Atlas Tabulae Geographicae Orbis Terrarum (1695-1704) or Orbis Antiqui Tabulae Geographicae Secundum Cl. Ptolemaeum (1720). Blank verso.

A crisp impression with a few spots in the image and a light dampstain along the centerfold at top. In the blank margins, there are ink stains, light damp stains, and a centerfold separation at bottom.