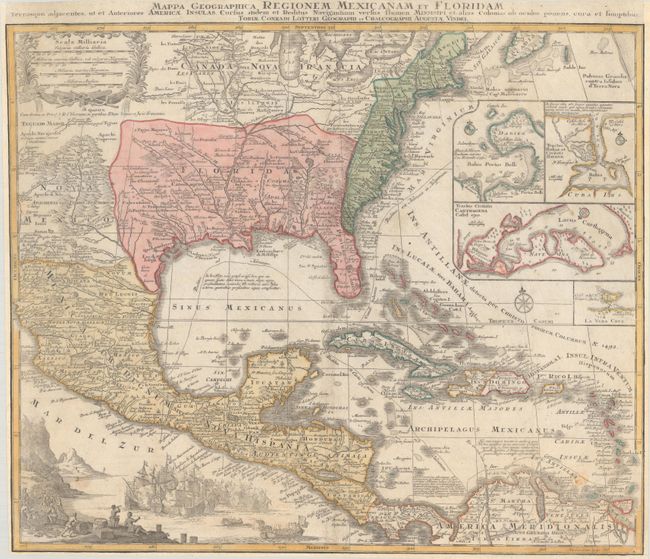 This is Tobias Lotter's decorative and beautifully engraved version of Delisle's important map of 1703 (Carte du Mexique et de la Floride). It provides a view of North America from the Great Lakes through the West Indies. The British colonies are confined east of the Appalachian Mountains, France controls the Mississippi valley and Florida, and Spain possesses Mexico. New Mexico is finely described with many native tribes and pueblos noted, including Acoma, Santa Clara, Isleta, and more. Zuni sive Cibola, Teguaip Maior, and Quivira are all identified in New Mexico. While geographically nearly identical to Delisle's chart, this map is very ornate; the lower left corner is filled with a huge sea battle and the upper left contains a pretty scale of miles cartouche. In the Atlantic are four inset plans of important trade centers in the Americas: Panama, Havana, Cartagena, and Veracruz. Lotter originally engraved this map for his father-in-law, Matthias Seutter. In 1756 he then succeeded Seutter and replaced the imprint with his own.

On watermarked paper with light soiling, two small worm holes, and a few wormtracks along the centerfold that have been infilled with archival materials on verso. The map has been professionally remargined at left, right, and bottom, with the neatline replaced in facsimile. A tiny chip at left has also been professionally repaired with a small portion of the map replaced in facsimile.