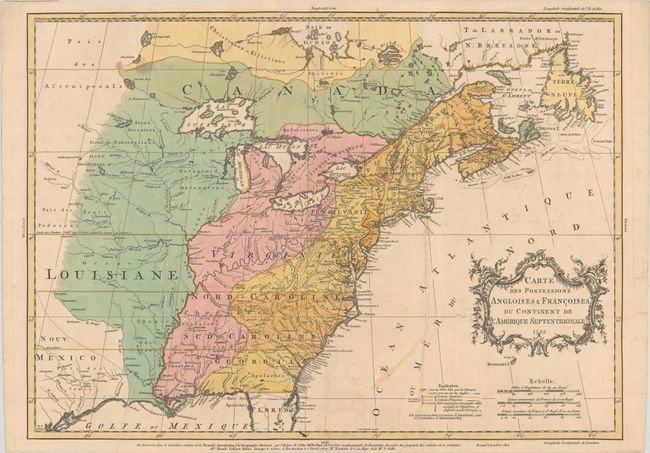 This is one of the best maps of the colonies at the outset of the French and Indian War. Palairet was the Agent to the States-General in London. In 1755 he published his map with a pamphlet "A Concise Description of the English and French Possessions in North-America" and in atlas format the same year, distributed in London, Amsterdam, Berlin, and The Hague. The map was beautifully engraved by Thomas Kitchen and intricately colored to show the disputed lands, forts, roads, and the extent of settlement in the region. The original coloring shows the British colonies in yellow, the French colonies in green, the disputed areas in pink, and the chain of forts being built by the French to encircle the British colonies highlighted in red. This is the first state as identified by McCorkle, Sellers and Van Ee, and Stevens and Tree, with only French text in the explication, whereas subsequent issues feature English as well. However, more recently Ashley Baynton-Williams and Barry Ruderman have identified 5 states of this map, this being the rare second state with the addition of several boundary lines and notations. The first state, prior to these additions, has only been found in a few surviving examples.

This map was based on John Mitchell's index of his large, epic map of the region, A Map of the British Colonies in North America published in 1755. Geographically, the map depicts the borders of the colonies extending well past the Mississippi River to the western reaches of the map. The Great Lakes are beautifully illustrated with Lake Superior still sporting the imaginary island of Philippeaux, and the area of present-day Texas is named Nouv: Mexico, with several roads and a handful of towns, including Cenis. One of the most interesting features on this edition is the red line that appears between Bay Vert, Nova Scotia, and Oswego on Lake Ontario. This line represents the extent of French claims into British territory as a result of French victories in the first 2 years of the French and Indian War, thus putting the publication date of this map around 1757-58.

The fact that this map includes elements in both French and English indicates that it was intended for wider distribution throughout Europe. Palairet was born in France but fled to England where he became a French tutor to King George II’s children. Perhaps as a result of his heritage, Palairet uses a neutral tone in both his Atlas Methodique and on this map, describing French advances as "claims" or "disputed lands" rather than as "encroachments," as one would typically find on English maps of the time period. A fascinating maps that illustrates the competing interests at the beginning of the French and Indian War.

A sharp impression in contemporary color on a watermarked sheet with some extraneous creasing and a couple of light stains.