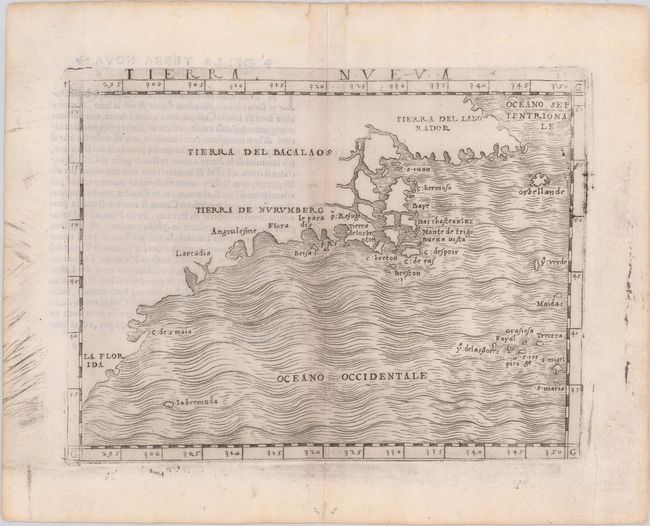 This important early map was the first map devoted to the East Coast of North America, and the first largely devoted to Canada. The map extends from Labrador south to Florida, and as far east as the Azores. This was one of the first maps of the area to show detail, based primarily on the expeditions of John Cabot (1497-98), Giovanni da Verrazzano (1524), and Jacques Cartier (1535-36). Gastaldi was known to use the most current geographical information available, and made use of numerous sources, including the manuscript maps from Verrazzano, Maggiolo, Cabot and others.

Several place names appear on this printed map for the first time and are still in use today, including Larcadia (Acadia), C. Breton, and Labrador. Verrazzano named Larcadia after the "beauty of the trees" and although it appears on Gastaldi's map in the area of the Outer Banks, North Carolina, the place name moved gradually further north in later years to represent the French area around Maine and Nova Scotia. The name Tierra del Bacalaos is also derived from reports by Verrazzano, who noted the land of Bacalaia, named after a fish (likely cod). Tierra de Nurumberg was the coast discovered by Verrazzano, who reported that the natives called it Nurumbega. The depiction of Newfoundland as a group of islands, which was derived from early accounts by Cabot, was first used by Mercator in 1538 and continued to be copied until the end of the 16th century. Further south is Angoulesme (New York Harbor), named by Verrazzano after Francis I.

Gastaldi's edition of Ptolemy's Geography was the first to include regional maps of the American continent. With maps engraved on copper, Gastaldi's work was conceived as the first "pocket" or miniature atlas. His monumental work was the most comprehensive atlas produced between Waldseemuller's Geographiae of 1513 and Ortelius' Theatrum of 1570. Italian text on verso.