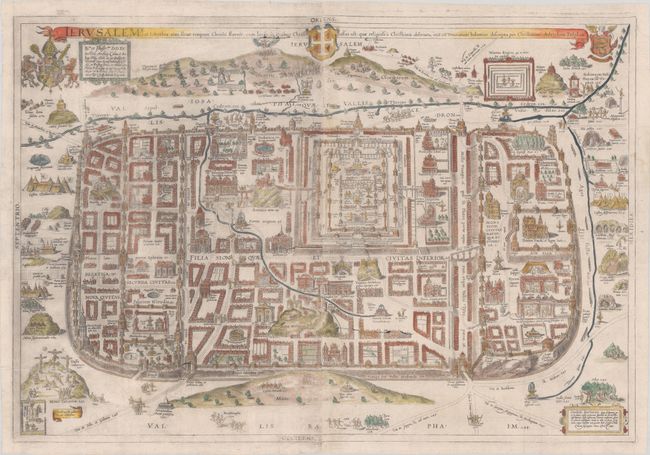 This impressive plan of the city of Jerusalem at the time of Christ was created by Christian Adrichom and first published in 1584. Kenneth Nebenzahl considers Adrichom's plan of Jerusalem "the most dramatic and important of the sixteenth century." Adrichom used a myriad of sources to develop his plan, including Bernhard von Breitenbach's woodcut panorama of the city, Sebastian Munster's view, the texts of pilgrims Burchard of Mt. Sion and William Wey, and the Bible and Josephus. The plan is oriented to the north to the left with the camps of the historic city's invaders just outside the city walls, and the ancient City of David and Mt. Sion in the south. There are over 250 key locations identified and numbered, which are more fully described in Adrichom's text. One of the most important contributions of the plan is Adrichom's identification of the locations of fourteen sites of the Stations of the Cross, which are still accepted today. Adrichom's plan of Jerusalem remained the definitive layout of the city until archaeological discoveries during the nineteenth century. Printed on two separate sheets, professionally joined.

The Theatrum Terrae Sanctae was an atlas and history of the Holy Land and was Adrichom's most important and famous work. Born in Delft, Christian Kruik van Adrichem, or Christianus Crucius Adrichomius, was a Catholic priest and theologian. Adrichom worked for thirty years on his three-part history of the Holy Land, and only succeeded in publishing the first part, Urbis Hierosolyma Depicta, during his lifetime. The remaining two parts were published posthumously by Georg Braun in 1590, with subsequent editions in 1593, 1600, 1613, 1628, and 1682. The Theatrum Terrae Sanctae contained 12 maps and plans: one of the Holy Land, nine of territories of the Tribes of Israel, one of the Exodus, and a town plan of Jerusalem.

Issued folding, now flattened on bright sheets with professional repairs to several short separations along the folds. There is light printer's ink residue, some small abrasions along the joint, and one tiny hole at top center.