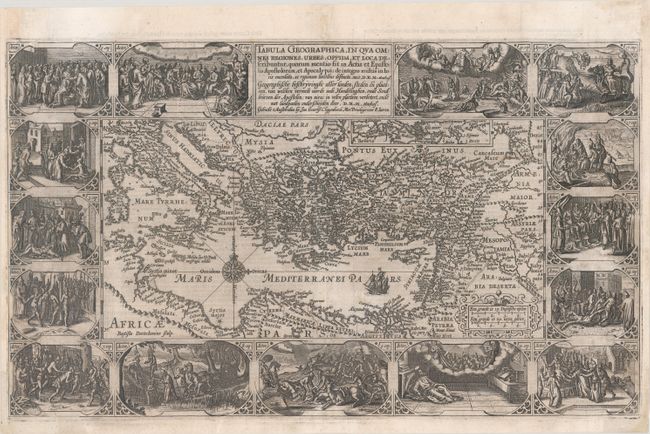 This superb, graphic map of the eastern Mediterranean, from Rome to Babylon, depicts the spread of Christianity as reported in the Acts of the Apostles. This is the final map of the standard set of five Holy Land maps normally found in Dutch Bibles. The map is surrounded by fifteen Biblical vignettes including the apostles receiving heavenly inspiration, and the events of the Apocalypse as in the book of Revelations. The map includes a small inset of the whole Mediterranean region and is further decorated with a compass rose, sailing ship and strapwork distance scale. This is the second state with Plancius' name in the cartouche replaced by D.R.M. Mathes. Dutch text on verso, from a Dutch Bible published by Cloppenburg.

This is the second series of Dutch bible maps by Petrus Plancius, first published in 1604 by Johannes Cloppenburg. The first series consisted of a world map and 4 small maps of the Holy Land and Middle East, engraved by Johannes van Deutecum and his two sons, Johannes and Baptista. After Johannes van Deutecum (the younger) published a new set of maps in 1595, Plancius realized that his own maps required updating. He commissioned Baptista van Deutecum to engrave the second series, who also enlisted the assistance of engravers Daniel van Bremden and Pieter Bast. Plancius' second series retained the same world map and 6 larger, re-engraved maps of the Holy Land and Middle East. The purpose of the maps was to help explain the biblical texts, but Plancius decided to take the maps one step further by adding 15 biblical vignettes surrounding each map, thereby transforming each map into a work of art.