"An Hysterical Map of South Carolina", 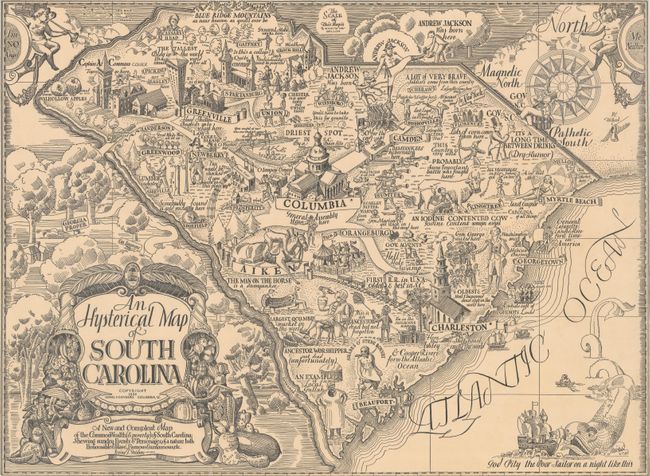 A superb, tongue-in-cheek pictorial map by Irving Geisberg (later Irving Geis), who was best known for his scientific illustrations, including the DNA double helix structure. Geis first created his "hysterical" map while a student of Fine Arts & Design at the University of South Carolina in 1932. An early edition of the map appeared as the endpapers of the school's yearbook, Garnet & Black, for which Geis served as Art Director. A second version of the map was then exhibited at the school's annual Fine Art Exhibition in 1933, however no known examples of this map exist. The map received so much attention that Geis made a third edition of the map and published it in 1934. The map is filled with illustrations and humorous notations that demonstrate Geis' appreciation of the history, culture, and lore of South Carolina. George Washington, General Lafayette, Andrew Jackson, and General Marion appear on the map, and there are references to the lumber, tobacco, and railroad industries. Several universities are noted, including USC, Clemson (identified only as "tigers"), Winthrop University in Rock Hill, and Converse College in Spartanburg. And of course as this map was published just one year after the end of prohibition, the Governor of neighboring North Carolina is shown drinking alcohol and sitting atop a liquor barrel -- a clear mocking of South Carolina's biggest rival.

Irving Geis was originally born in the Bronx, New York, but moved to Anderson, South Carolina at the age of three. Although he studied architecture at Georgia Tech and UPenn, he realized that careers in architecture would be limited after the Wall Street Crash, and shifted his concentration to art, where he completed his studies at the University of South Carolina. Geis moved to New York in 1934 and began work as an illustrator for Fortune magazine. During World War II, Geis served as Art Director and Chief of Graphics of the Office of Strategic Studies, a predecessor to the CIA, and a Director of the Office of War Information. In 1948, Geis began work for Scientific American magazine, where he became internationally known for his innovative macromolecular illustrations.

Two later editions of the map were published by Eugene H. Salmon and the R. L. Bryan Company through 1970 with updated copyright information. This example is the rare 1934 edition.

A nice impression, trimmed to neatline and mounted on thin, archival tissue. A tiny tear along the bottom edge has been archivally repaired.