"Plantations on the Mississippi River from Natchez to New Orleans 1858", 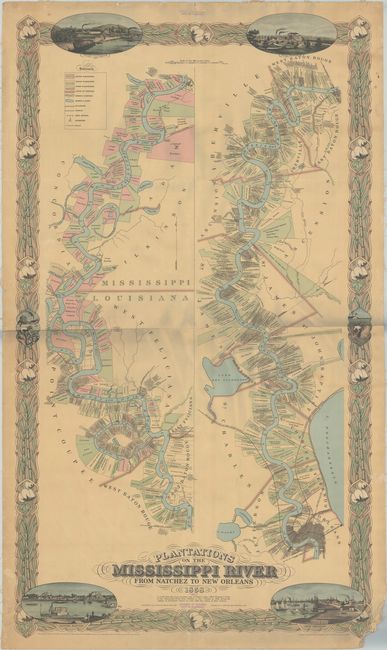 This is a later edition of Marie Adrien Persac's chart of the Mississippi River, originally published by Benjamin Moore Norman as "Norman's Chart of the Lower Mississippi River, by A. Persac" in 1858. The strip-style chart highlights the numerous cotton and sugar plantations along the Mississippi River between Natchez, Mississippi and New Orleans, Louisiana. Each plantation is identified by the property owner and the name of the plantation. Other details are also included, such as county boundaries, railroads, canals, post offices, and churches. Well-known for his paintings and views, Persac incorporated lovely vignettes of New Orleans, Baton Rouge, a cotton plantation, and a sugar plantation within the border, which is composed of cotton plants and sugar cane. The vignette of New Orleans is viewed from Esplanade looking upriver, with the French market visible to the right. Persac's chart was well advertised in the classifieds in the New Orleans Crescent newspaper in March and April 1858, and he was noted as having "descended the river in a skiff, landing at every mile, and drawing every plantation line and taking down every name and landmark on both banks of the river." There are only around 10 known examples of Persac's original 1858 chart known to exist - one of which is held by the Louisiana Supreme Court and has been used to settle land ownership cases. Persac's chart was re-drawn by Joseph Aiena, an artist with The Chambers Agency, Inc. and published by Pelican Book Shop in 1931. Printed by Rand McNally & Company. Laid on linen, as issued.

Lightly toned and laid on original linen with three horizontal creases, some abrasions mostly within the border, and marginal soiling. There are two old stamps from the University of California Dept. of Geography in the top blank margin and adjacent to the publisher's imprint. There are a few tiny chips and tears along the edges of the sheet and the bottom right corner is chipped with loss of a small portion of the border. There are grayish shadows along the horizontal fold at center that are caused by our scanner and do not appear on the map itself.