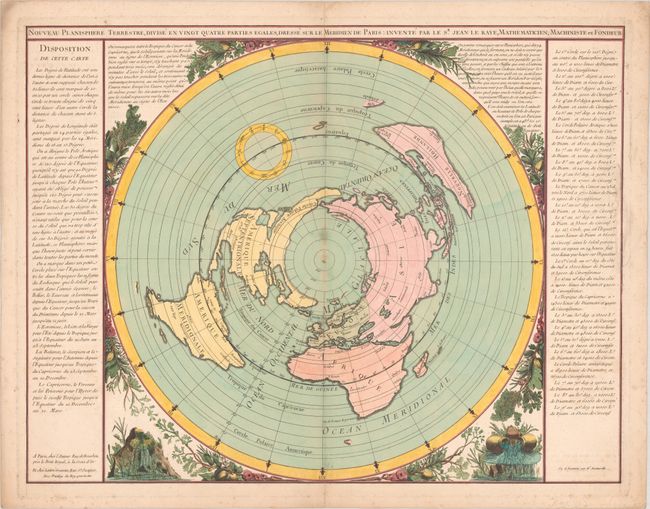 This rare world map is presented on a north polar projection and includes a lovely surround with branches, flowers, and urns of flowing water to represent the seas. The continents are shown in outline without country delineations and feature only a few named cities, including 5 in North America: Quebec, Boston, Santa Fe, New Orleans, and Mexico City. North America also features a large, unnamed Sea of the West with an additional waterway just to the north. Although many major lakes are depicted, others are conspicuously absent, such as the Great Lakes. Additionally, no rivers are shown, so there are no waterways connecting the Sea of the West with Hudson Bay. Australia is still called Nouvelle Hollande and is attached to Tasmania. Only the South Island of New Zealand is shown, and only partially. A small circle centered on the equator in the Pacific Ocean shows the 12 signs of the zodiac. The Prime Meridian is centered on Paris, and the hemisphere is surrounded by columns of French text describing the composition of the map. Created by Jean Le Raye, who is noted as a mathematician, machinist and founder. The map was "seen and examined" by Robert Bidet de Montcarville, who was a Professor of Mathematics at the College of France. Published by Le Raye and Lattre.