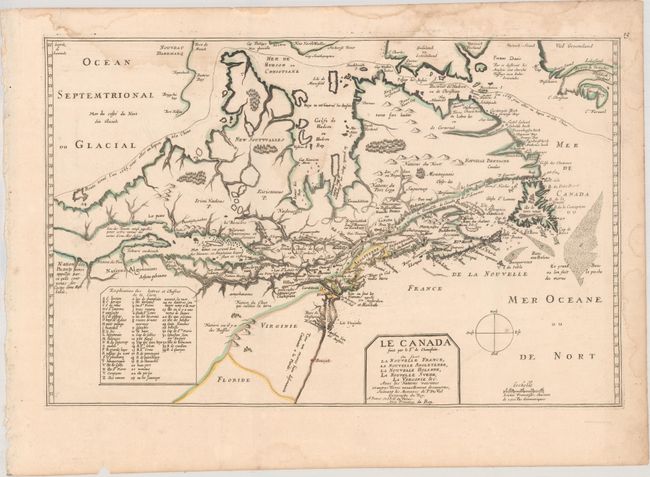 This is the very rare fifth state of the Champlain/Duval map of New France. The map has its origins in an untitled and unfinished copperplate engraved to accompany the publication of Champlain's Voyages et Descouvertes Faites en la Nouvelle France... in 1619. Engraved in Melchior Tavernier's shop, the plate built on Champlain's 1613 map of the region with new information based on his expedition of 1615-16. Pierre Duval acquired the unused plate in the early 1650s and pulled a few proof copies before updating the plate for publication. There is only one known example of this proof map, and it is the one acquired by the John Carter Brown Library in 1953.

Champlain's map is the first to show Lake Huron and to delineate the route of the Ottawa River. It is also the first appearance of Lake Ontario based on a firsthand account. Two possible passages to the Pacific are shown via the Arctic and the open-ended Great Lakes. Extending beyond New France, it depicts the English and Dutch explorations along the East Coast. Champlain's map suggests a relationship between the French settlements and the new English colony in Virginia with its depiction of the Chesapeake Bay, which is unmistakably drawn from Captain John Smith's 1612 map. Smith's map was still obscure at the time this map was engraved so its use as a source here is curious; according to Verner and Stuart-Stubbs, "[The] information it contained did not enter fully into the stream of geographical knowledge until after 1624." Although the coast south of Chesapeake Bay had been mapped by De Bry in 1590, the region is here labeled Terre non encores bien descouverte continente a la Floride.

Duval first published the map in 1653 with additional place names (including English, Dutch, and Swedish colonies), a title cartouche, and his own imprint. Otherwise he largely adhered to Champlain's original cartography. This is an example of the fifth state, published circa 1670. Notably, this state adds new place names including Boston, Manhate (Manhattan), Montreal, Quebec, and Port Royal. It also notes an Arctic expedition (Route tenue l'an 1665 pour aller au Iapon et a la Chine), possibly a reference to the explorations of Pierre-Espirit Radisson and Medard des Groseilliers, forerunners and founders of the Hudson's Bay Company.

Contemporary outline color on a watermarked sheet with light dampstains that enter into the map image at top and a couple minor creases.