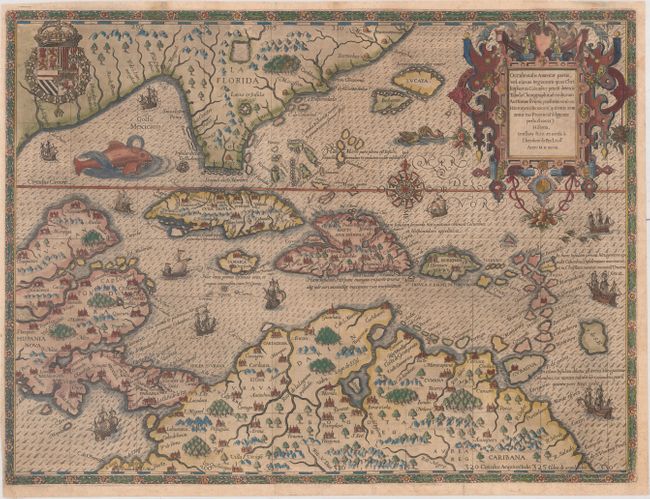 This copper engraving is from a remarkable series of publications, illustrating voyages of discovery and travels of exploration to various parts of the world. The project was begun by Theodore de Bry of Frankfurt, in 1590 and was to continue for another 54 years. They became known collectively as the Grands Voyages (to America and the West Indies) and the Petits Voyages (to the Orient and the East Indies). De Bry died after the first six parts of the Grands Voyages were completed. The project was completed initially by his widow and two sons, Johann Theodore de Bry and Johann Israel de Bry, then by his son-in-law, Matthaus Merian in 1644.

This spectacular map illustrates the region traveled by Girolamo Benzoni between the years 1541 and 1556. Centered on the disproportionately large islands of the Caribbean, the map also provides an early delineation of Florida derived from that of Le Moyne and is one of the earliest maps to detail northern South America. The islands of the Bahamas are noticeably too large and placed considerably north of their true location. Various legends on the map mark the four voyages of Columbus and make an early mention of the Gulf Stream. De Bry's extraordinary engraving skill and artful style are very evident with the large elaborate cartouche, coat of arms, compass rose, sea monsters, Spanish galleon, and intricate border.

Issued folding, now flattened on paper with a small coat of arms watermark. There is light printer's ink residue, minor toning, and expert, nearly invisible, repairs to a 1/2" tear at bottom left, a 4" tear extending from the top left corner to the Gulf of Mexico, and a few tiny chips in the top blank margin.