The First Map of Roatan in Full Contemporary Color

"A Draught of the Island Rattan, in the Bay of Honduras...", Toms, William Henry 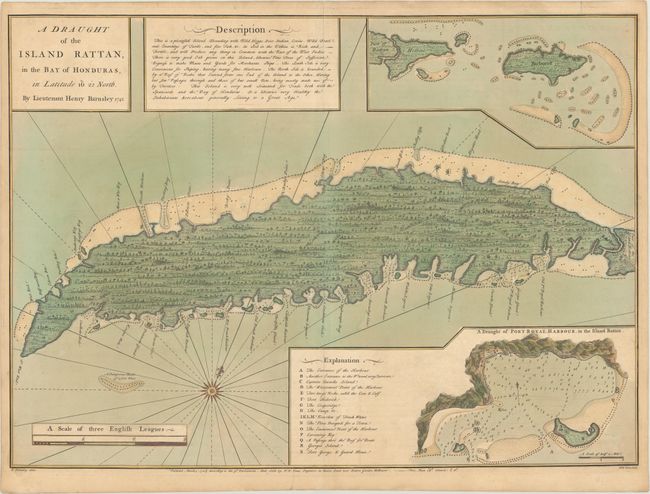 This extremely scarce map was the first detailed map to focus on Roatan Island. This island was an important strategic location in the Caribbean for the British due to its location across the Bay of Honduras from Trujillo, the oldest Spanish outpost in Central America. The British were in constant competition with other European imperial powers for land and resources in Latin America, and in particular with the Spanish who were dominating commerce in the region by the early 18th century. Conflict increased during the War of Jenkins' Ear, and the British concluded in 1742 that a fortified settlement needed to be established on Roatan. New Port Royal Harbor was determined to be the ideal location, and Fort Frederick and Fort George were constructed to protect the harbor.

This map, drawn by British Lieutenant Henry Barnsley in 1742, shows the lack of knowledge of the interior of the island, with detail confined to the coastline. The large inset at bottom right focuses on Port Royal Harbor, with a lettered key identifying the two forts, locations of dwellings, the navigable entrances to the bay, and other important information. Interestingly, the settlement established by the British was named Augusta, located adjacent to Fort Frederick, however Augusta is not noted on this map, leading one to conclude that this map was drawn prior to the naming of the town.

Once the settlement was established, the British encouraged colonization of Augusta, and this map was likely used as propaganda to convince more English subjects to emigrate. The "Description" at top characterizes the island as "plentifull" and "fertile" with numerous natural resources, located conveniently for shipping and trade with both Spaniards and the Bay of Honduras. Moreover, the inhabitants of the island generally lived "to a great age."

The British were forced to abandon its settlement and forts in 1748 at the conclusion of the War of Jenkins' Ear as a result of the Treaty of Aix-La-Chapelle.

Engraved and sold separately by William Henry Toms, dated March 5 1743/4. The price on the map is indicated as "Plain 1s. 6d. Color'd 2s. 6d." This engraving is very rare, with no dealer or auction listings and only a few examples found in institutions.

Full contemporary color with light toning, minor soiling, and a 1.5" tear in the bottom right corner of the map that has been archivally repaired.