"A New Map of Germany Divided Into Its Circles Which Are Those of 1. Austria 2. Lower Rhine or of the Four Electors 3. Upper Saxony...", Laurie & Whittle 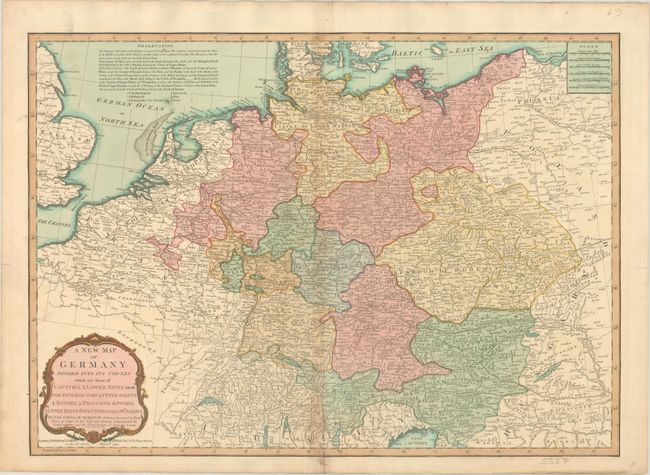 This detailed map centers on Germany divided into its Imperial Circles. It extends to include the Low Countries, Switzerland, present-day Czechia, Austria, and parts of England, France, Italy, Hungary, Poland, and Denmark. There is good topographical detail of mountains, rivers, and lakes, and many towns and cities are identified, including Hamburg, Bremen, Cologne, Amsterdam, Antwerp, Zurich, Prague, Vienna, London, Paris, Milan, Buda and Pest, Warsaw, and Krakow. A note at top left remarks upon the political divisions and includes a key identifying bishoprics and archbishoprics, Commandries of the Teutonic Order, Imperial Cities, abbeys, and priories. There are six distance scales at top right and a decorative title cartouche at bottom left.

There is light toning along the centerfold and a centerfold separation at bottom that extends 1.5" into the image that has been closed on verso with old paper.