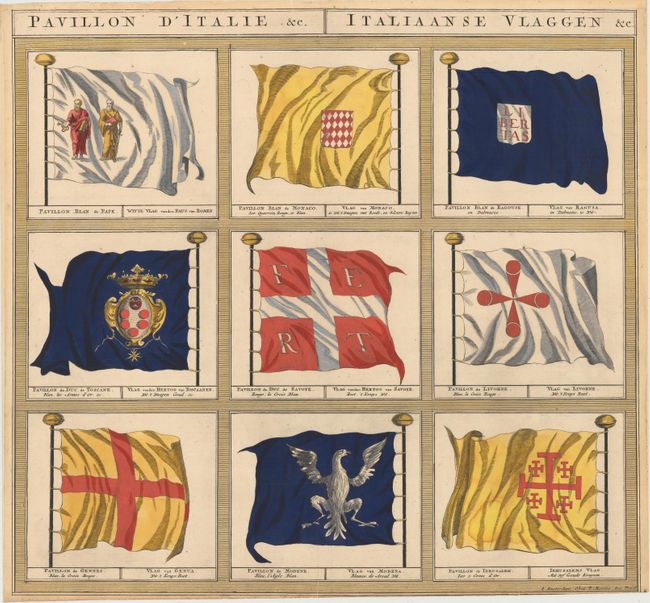 In the 1680's, Jean-Baptiste Colbert, Minister of Finance of France under the rule of King Louis XIV, commissioned a group of astronomers, mathematicians, and hydrographers to map the coast of the Europe from Norway to Gibraltar. The result of their efforts was Le Neptune Francois, first published in 1693 by Alexis-Hubert Jaillot. Pierre Mortier, having been granted in 1690 the privilege of distributing in Holland the maps and atlases of French publishers, republished Le Neptune Francois the same year with re-engraved plates. Le Neptune Francois was the most expensive sea atlas published in Amsterdam during the latter part of 17th century. Mortier published further additions in English, Dutch, and again in French circa 1700-03. In a few of these later French and Dutch editions, Mortier included 12 engravings of sea flags. Because Mortier's sea flags were only published in a few editions, they are extremely rare. This engraving depicts the flags of the Pope of Rome, Monaco, Ragusa, Tuscany, Savoy, Livorno, Genoa, Modena, and Jerusalem.

A fine impression with a short printer's crease at bottom center, a 1/2" tear at bottom that has been closed on verso with archival tape, and a narrow bottom margin, as issued. There is slight tackiness on verso, as the engraving was professionally removed from an archival board.