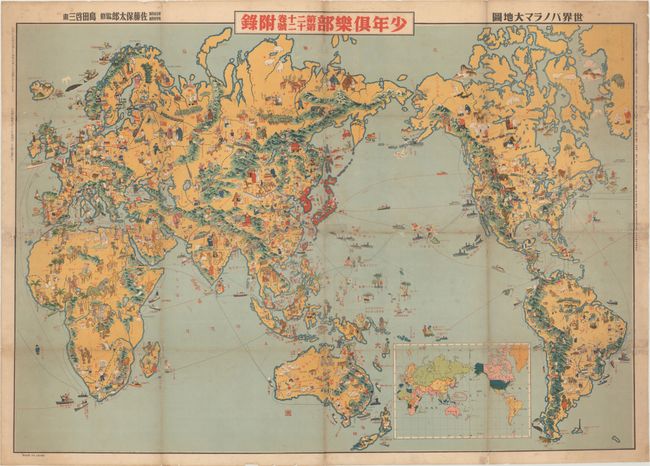 This fascinating pictorial world map was created by Keizo Shimada. The map was published by Yasutarou Sato as a free insert in the December 1933 issue of Shonen Club, a monthly boys' magazine that was issued from 1914-46. The map is centered on the Japanese Empire, which is marked in red and includes Korea, Taiwan, and the Kuril Islands. (By the end of WWII, Japan would lose control of all three of these occupied territories.) As the focus is on the Japanese Empire and the Pacific Ocean, much of the Atlantic Ocean and part of Greenland are omitted. The map is filled with colorful and whimsical images that illustrate the local people, culture, flora, and fauna in a truly 'kawaii' fashion. There are bison, livestock, Native American Indians, coal miners, and farmers in North America. Of course many of the vignettes depict stereotypes (certainly not politically correct in our day), such as the large-lipped Africans. Each country is also represented by its national flag, although there are some errors; for instance, the flags of Columbia and Ecuador are interchanged and the flag of Mexico bears the wrong colors. Other inconsistencies exist, such as in Arabia where people pray towards Medina rather than Mecca to the south.

Japan's military strength is also featured on the map, with Japanese destroyers and a bi-plane patrolling the waters in the western Pacific while American destroyers protect Hawaii and the western coast of North America. Ironically, the Naval officer sitting atop the destroyer adjacent to Hawaii appears to be smiling and waving towards Japan, which would launch a surprise offensive attack on Pearl Harbor less than a decade later.

This map presents a compelling depiction of the Japanese view of the world prior to the Second Sino-Japanese War and WWII, presented in a playful way for the Japanese youth of the time.

Issued folding, with light soiling and toning along the folds. The map has been professionally conserved to repair a number of separations along the folds and some small holes, with the image replaced in facsimile.