"To the Right Honourable John Lord Sommers Baron of Evesham ... This Map of North America According to ye Newest and Most Exact Observations...", Moll, Herman 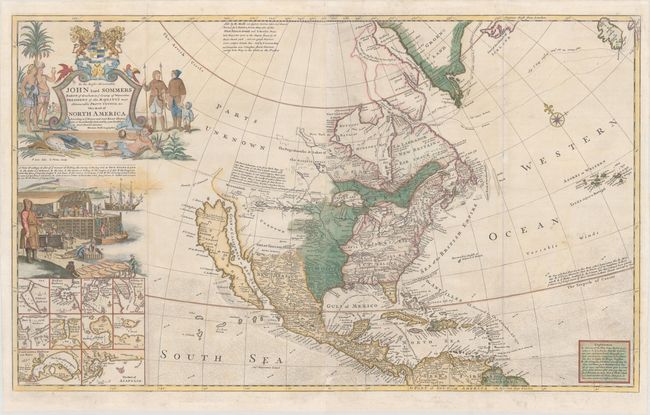 Moll's map of North America was first published circa 1720 in response to Delisle's influential map Carte de La Louisiane de du Cours du Mississipi published a couple of years prior, in an attempt to counter Delisle's French claims to the Carolinas. This rare, unrecorded edition was published by Thomas Bowles at the beginning of the French and Indian War and was updated to show entirely new territorial boundaries, with British claims extending to the Mississippi River. Spain is in control of Florida and the western United States, and France continues to hold on to Louisiana in the central US. This updated edition was published contemporaneously with Mitchell's 1755 map, which was the first to showcase the newly extended British colonial borders. However, some theorize that Thomas Bowles may have beat Mitchell to the press with this map due to the fact that a new edition of Moll's atlas appeared in the 1750s, possibly as early as 1754.

Interestingly, numerous changes were made to the eastern US, while the western US was left virtually untouched and therefore outdated. This is one of the latest maps still to show California as an island. California is illustrated with an indented northern coast on the second Sanson model, with New Albion depicted according to Sir Francis Drake and Mozeemleck Country and Straits of Annian to the north. Lahontan's fabled R. Longue and great salt lake of the Gnacsitares appear just east of Mozeemleck Country. The map also shows the tracks of Captain Hudson and Captain James' in their searches for a northwest passage in the early 17th century. Ten insets of harbor plans fill the bottom left corner, including Boston, New York, Charlestown, Port Royal, St. Johns, Acapulco, Cartagena, and Havana.

As with many of Moll's large maps, this map incorporates numerous decorative elements. An elaborate title cartouche dominates the upper left corner with a dedication to the Right Honourable Lord John Somers, an English Whig jurist and statesman who is known for his role in the Bill of Rights in England in 1689. The title is flanked by Indians and Eskimos, tropical birds, and the coat of arms of the Somers family with the Latin motto "Prodesse Quam Conspici" (to Accomplish Rather than to Be Conspicuous). A large vignette below the title illustrates the important cod fishing industry in Newfoundland, which lends this map its nickname as the "Codfish Map." The vignette shows numerous steps within the process, including fishing, carrying, salting, pressing, and drying the fish. Engraved by B. Lens and G. Vertue.

Issued folding, now flattened with a small abrasion at bottom center and professional repairs to several short separations and tiny tears along the folds, as well as to a number of chips in the bottom blank margin, just passing the neatline along the centerfold and right-hand fold.