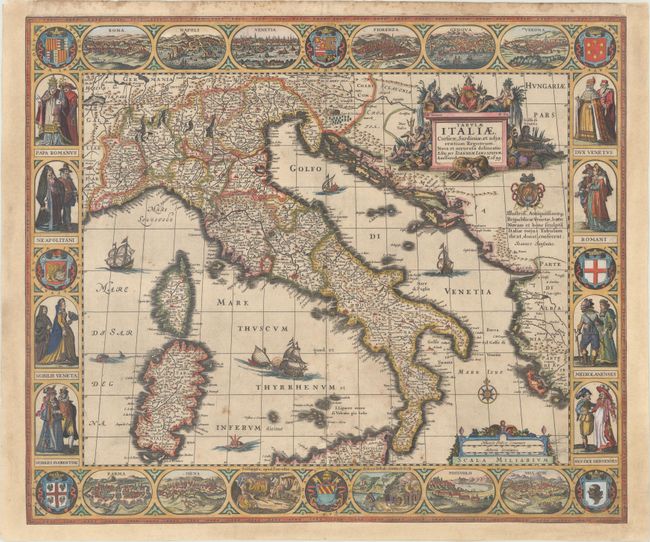 This is one of the most decorative maps of Italy, surrounded on four sides by engravings of cities and costumed figures. The map extends to include Corsica, Sardinia, and just the northern coast of Sicily. At top and bottom are views of the cities of Rome, Naples, Venice, Florence, Genova, Verona, Parma, Siena, Pozzuoli and Velletri. At the sides are panels displaying nobles and commoners of Rome, Naples, Venice, Florence, Milan and Genoa. Also included in the surrounding panels are several coats of arms and images of two volcanic attractions: Solfatara and Grotto del Cane. The map is further adorned with sailing ships, sea monsters, and an allegorical title cartouche, featuring a queen representing Italia, river gods, and Romulus and Remus being suckled by a she-wolf. A dedication to the Venetian Republic appears below the title cartouche.

This map first appeared in Jansson's Atlantis Maioris Appendix in 1630, with the date "1628" in the title cartouche, and then again in two editions of his Newer Atlas in 1638 and 1642. This map must have also been issued separately, as this example bears the date of "1659" in the title cartouche. Another edition of this map was published in 1631 and 1635 with a different title (Italia Nuovamente Piu Perfetta Che Mai per Inanzi Posta in Luce, Scolpita et con le Suoi Figure Uivamente Rappresentate), dated 1617, and with Jodocus Hondius' imprint rather than Jansson's. The Hondius and Jansson editions are very similar and it is unclear which was published first, although Van der Krogt lists the Jansson edition first within his carto-bibliography, Koeman's Atlantes Neerlandici.

A nice impression on paper with a large coat of arms watermark, light soiling, and a couple of tiny worm holes. There are professional repairs to a centerfold separation that enters 4" into image at bottom and several adjacent small holes, with a minor amount of image replaced in facsimile. A 1/2" tall strip extending along the bottom of the lower vignettes has been expertly replaced with the image in facsimile. The map has been remargined at both sides and at bottom. The repairs and facsimile work are nearly invisible, resulting in a beautiful presentation.