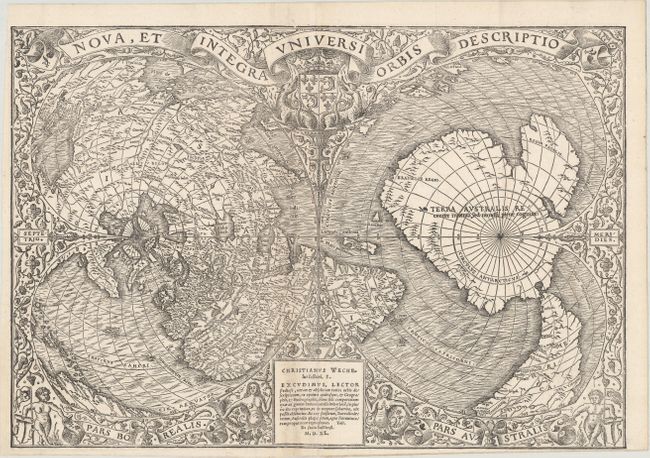 This stunning map was prepared by French cartographer Oronce Fine in 1531 for the 1532 Paris edition of Johann Huttich and Simon Grynaeus' Novus Orbis Regionum. The work, which was a compilation of accounts of voyages and discoveries, was first published in Basle in 1532 with an oval world map by Sebastian Munster and Hans Holbein. The oval world map was replaced by this double-cordiform world map in the 1532 Paris edition, which was printed by Christian Wechel. The plate was used by several different publishers for their works, including Glareanus' De Geographia in 1536 and Pomponius Mela's De Orbis Situ in 1540, which was also printed by Christian Wechel. The map went through six different states for the various publications, with changes to the imprint and date in the cartouche at bottom. This example is the fourth state bearing the imprint of Christian Wechel with the date M.D.X.L. (1540), as published in Mela's De Orbis Situ.

The double-cordiform projection is constructed of two heart-shaped forms, each centered on one of the poles. The right-hand cordum is centered on the South Pole and is mostly filled with Terra Australis, which is noted as being 'recently discovered but not yet explored.' The massive size of the great southern continent was assumed to balance the landmasses in the northern hemisphere, thereby enabling the earth to maintain equilibrium on its spinning axis. South America extends down to Terra Australis with the adjacent waters labeled Mare Magellanicum, which is the first reference to Magellan's circumnavigation around the world to appear on a printed map. Although an R. Brazil appears in South America, Brasielie Regio is placed along the Indian Ocean side of Terra Australis, which was likely misplaced due to a misinterpretation of several confusing accounts of Brazil being located across the waters from Africa.

The cartography of the left-hand cordum becomes even more convoluted. Here, despite knowledge of Magellan's voyage, Oronce Fine continues the myth that Asia is connected to the Americas. Northeastern Asia (essentially Russia) is connected to Labrador, which is labeled Baccalar. Further south in eastern Asia (at top left on the map), the nomenclature between Asian places and Central American places become interspersed. Central and South America are continued at bottom left, with several Caribbean islands noted, including Jamaica, Hispaniola, Puerto Rico (Borique), Dominica, and Grenada.

The map is surrounded by a delicate floral motif with a pair of mermaids flanking the cartouche at bottom and cherubs holding a coat of arms and a flag in the bottom corners. The title is presented in a banner at top above the French coat of arms.

An excellent impression on a clean, bright sheet with a small circular watermark, issued folding with a narrow bottom margin. A small binding trim at bottom left has been professionally replaced with leafcasting. A small slice to the left of the centerfold (extending 3mm wide at the bottom of the image to 1mm wide at the top of the left-hand cordum) has been expertly repaired, with the missing image seamlessly replaced in facsimile.