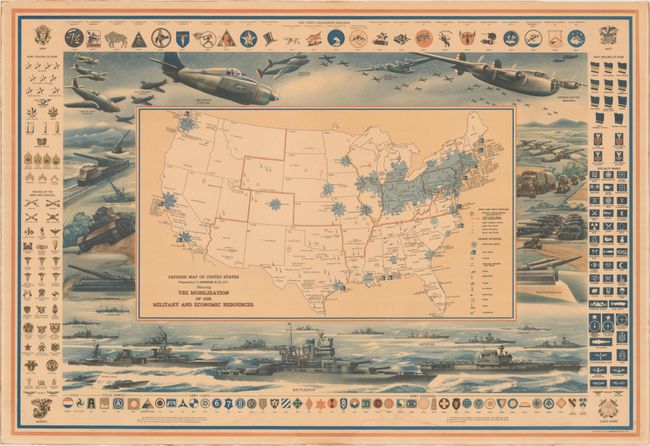 Prior to World War II, pictorial maps portrayed military stations, posts, and operations in a rather formulaic cartoonish, humorous approach. However, as the United States joined the Allied forces in 1941, the cartography took a more serious tone as in the case of the present map.

This thematic map of the continental United States presents the location of both Army and Navy Stations as well as the numerous supporting defense industries including ship yards, planes, guns, munitions, tanks, and more. The map also highlights "industrial areas" in blue, which fully engulfs Indiana, Ohio, and Pennsylvania. Outside of the map image are wonderful illustrations of military aircraft, tanks, and ships. Flanking the left, right, and top are the various insignia of the Army, Navy and Air Force.

Light toning with some faint dampstains along the border at bottom. There is light extraneous creasing at left, and a few minor edge tears confined to the bottom blank margin that have been closed on verso with hinge tape.