"The Geography of the Great Solar Eclipse of July 14, MDCCXLVIII. Exhibiting an Accurate Map of All Parts of the Earth in Which It Will Be Visible with the North Pole According to the Latest Discoveries", Jefferys, T. 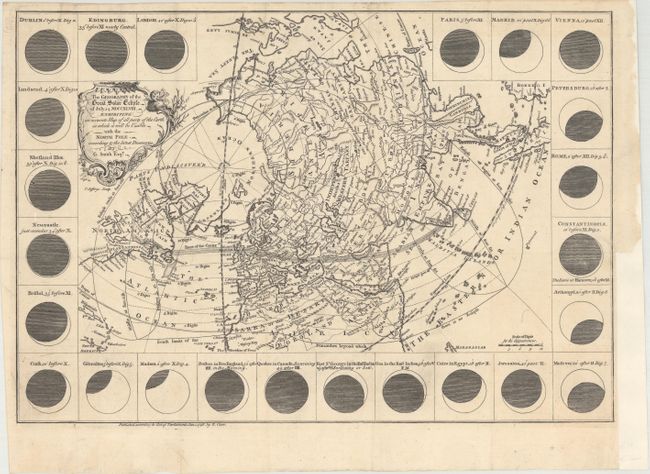 This fascinating map charts the geographical path across the Northern Hemisphere of the annular solar eclipse on July 14th, 1748. It is surrounded by 24 vignettes of the eclipse in various world cities including London, Paris, Madrid, Vienna, Rome, Constantinople, Moscow, Jerusalem, and Boston. The eastern coast of the present-day United States has just around a dozen place names and is labeled British Plantations. Decorative cartouche and titling. The imprint below the neatline reads, "Published according to Act of Parliament. Jan. 1. 1748. by E. Cave."

A crisp impression issued folding, now flat, laid on sturdy paper. There is a binding trim and associated tiny tear at right.