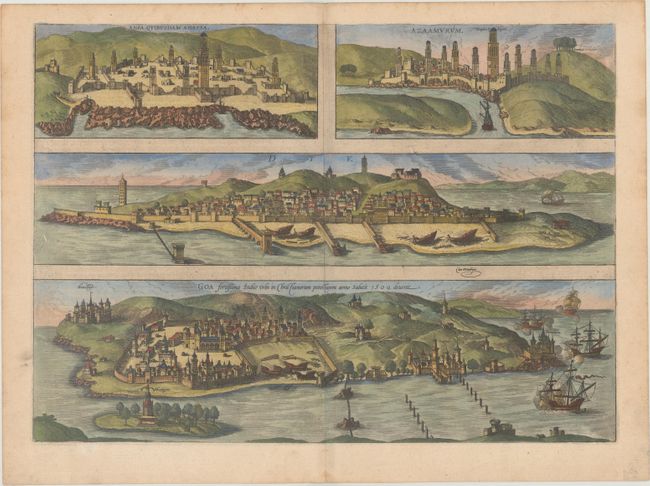 Braun & Hogenberg's Civitates Orbis Terrarum or "Cities of the World" was published between 1572 and 1617. Within the six volumes, 531 towns and cities were depicted on 363 plates, providing the reader with the pleasures of travel without the attendant discomforts. Braun wrote in the preface to the third book, "What could be more pleasant than, in one's own home far from all danger, to gaze in these books at the universal form of the earth . . . adorned with the splendor of cities and fortresses and, by looking at pictures and reading the texts accompanying them, to acquire knowledge which could scarcely be had but by long and difficult journeys?" Braun and Hogenberg incorporated an astonishing wealth of information into each scene beyond the city layout and important buildings. The plates provide an impression of the economy and prominent occupations, and illustrate local costumes, manners and customs.

This sheet includes four lovely views of exotic cities. At top left is Anfa, Morocco, which later became known as Casablanca. At top right is Azemmour, Morocco. The central view shows Diu, India, with several long piers extending into the water. At bottom is Goa, India, as it appeared in 1509. A shipbuilding yard can be seen near the center of the view, and the Fort of São Tiago of Banastarim, or Benastari Castle, appears at far left. German text on verso.

A sharp impression on paper with a small coat of arms watermark, minor printer's ink residue, marginal soiling, and a couple of tiny worm tracks near the centerfold at top.