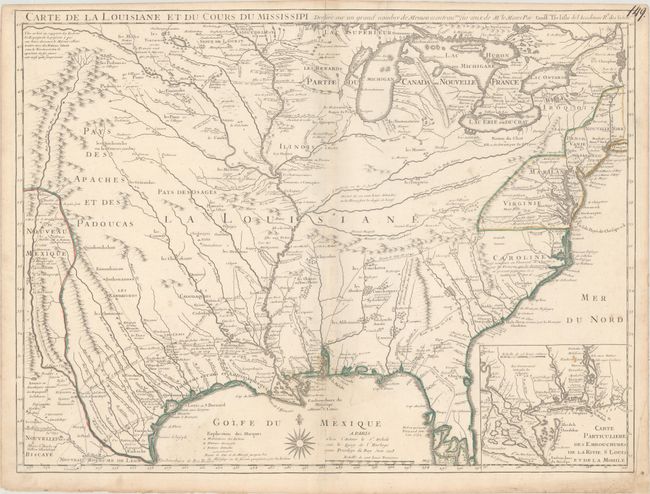 This enormously influential map of the French possession of Louisiana drew together the cartographic work of the previous half century and had a tremendous impact on the history of cartography. The map was designed for the political purpose of invalidating the English claims west of the Appalachian Mountains and laid claim to Carolina by the French, which provoked an angry English response. Here Charleston is marked “Charles Town nomme pas les Francois Charlefort” (Charles Town named Charlefort by the French).

This map became the foundation map for the French colony of Louisiana. During an expedition down the Mississippi River, La Salle named the Mississippi Basin La Louisiane after Louis XIV and claimed the area for France in 1682. Delisle depicts the French claims to the Rio Grande as the boundary line between Louisiana and Mexico, a position which was contested between the French, Spanish and British and spawned a “cartographic war.”

The name Texas made its first appearance in print on this map, with the legendary Mission de los Teijas, established in 1716. The notation of Indiens errans et anthrophages along the Gulf Coast warns of cannibals. Just below is present-day Matagorda Bay, here named S Louis ou S Bernard. Adjacent to the bay is Fort Francois, established by la Salle in 1685 on his final exploration. Along the route between Fort Francois and Mission de los Teijas is the location where la Salle was killed by one of his own men in 1687.

French and English forts and settlements are marked throughout the map, as are numerous Indian tribes. An inset of the Mississippi Delta and Mobile Bay fills the lower right corner. This landmark map was copied, in whole and in part, by numerous cartographers during the remainder of the 18th century. This is the important first issue, published in June 1718 before information on the new settlement of New Orleans had reached Paris.

Original outline color on watermarked paper with minor toning along the centerfold, marginal soiling, and a very faint damp stain at bottom center extending through the majority of the Gulf of Mexico. An old manuscript page number appears at top right.