Rare, Early Ptolemaic Map of Northern Africa and the Mediterranean 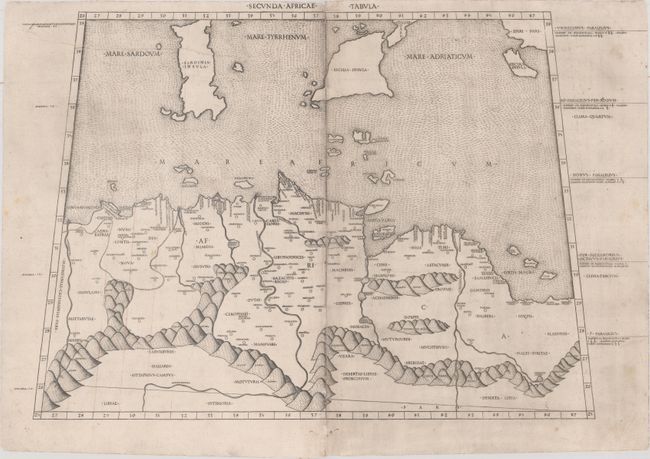 This is an extremely early, and rare engraving of the region of Tunisia with parts of Libya and Algeria, extending north to include Malta, Sicily, Sardinia and the island of Corfu (Cercyra). The map is beautifully engraved with stippled seas and exaggerated mountain ranges. This map first appeared in the 1478 edition of Ptolemy's Geographia, which was compiled by Jacobus Angelus and Domitius Calderinus, with the engraving supervised by Conrad Sweynheym and Arnold Buckinck. The same plates were used gain in the 1490, 1507 and 1508 editions. Nordenskiold explains that the maps from these editions were: "masterpieces of copper-plate printing, not surpassed for centuries, and they will still take the first place among the maps of all the numerous editions of Ptolemy's geography hitherto published." Printed from two plates and professionally joined.

Watermarked paper with a printer's crease at top left, light soiling, and several small notations and lines of longitude written in old manuscript ink. There are a couple of tiny abrasions along the joint and a short separation along the joint at top.