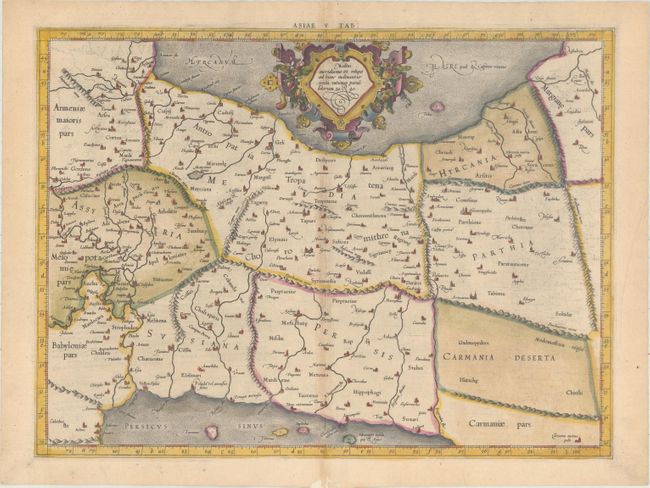 Fine Ptolemaic map depicting much of modern-day Iran, Iraq and part of Armenia. The map stretches from the Persian Gulf to the Caspian Sea and features Babylon (Baghdad), the Tigris and Euphrates Rivers. This example was published in the very first edition of Mercator's interpretation of Ptolemy's great Geography. This is also the first state of this map, with the original cartouche at lower left, which was re-engraved in 1695. Latin text on verso with an alternate title: Asiae Tabula V Continet Assyriam, Mediam Susianam, Persidem, Parthiam, Carmaniam Desertam.

Although Mercator is most renowned today for the projection he popularized and for first using the term Atlas for a collection of maps, he devoted much of his life to his Ptolemaic maps. The maps were beautifully engraved as nearly as possible to their original form and embellished with fine cartouches.

There is offsetting at far right and left, light toning along the centerfold, and a few small worm tracks along the bottom edge of the sheet that have been professionally repaired. Remnants of hinge tape on verso.