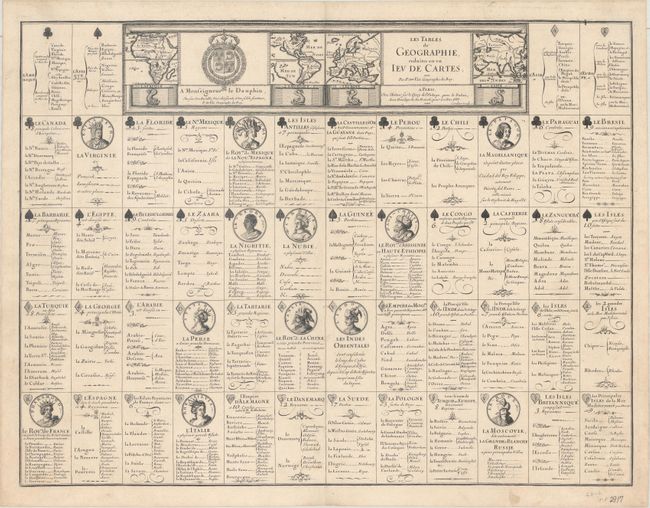 This folio sheet contains a very rare set of 52 playing cards. The title cartouche and dedication includes four tiny continent maps of Africa, the Americas, Europe and Asia. The map of the Americas is noteworthy for the island of California, a massive landmass in the north Pacific, and the usual configuration of the huge southern continent. Early playing cards often featured a geographical theme, though relatively few featured actual maps. In this set, each suit represents a continent; Clubs for America, Spades for Africa, Diamonds for Asia, and Hearts for Europe. The face cards include medallion portraits of royalty and each card describes the various regions and cities. For the Americas, the king is Montezuma of Mexico, the queen is represented by Elisabeth for Virginia, and the jack is a Patagon native. For Africa, the king is Zaga-Christ (the legendary Christian king of Ethiopia), the queen is Candace of Nubia, and the jack is a native of Nigeria. For Asia, the king is represented by Vanlie the Tartar Emperor of China, the queen is Statira of Persia, and the jack is a Hindu merchant of the East Indies. For Europe, the king is Pharamond (the early king of the Franks), the queen is Rhea-Silvia (the mythical mother of the twins Romulus and Remus, who founded the city of Rome), and the jack is Le-Roux (the Red) of Moscovie. Complete, uncut, sets of early playing cards are extremely rare because their survival rate was very low due to their ephemeral nature.

A nice impression on a sheet with a watermark of the French royal arms. There are a couple of faint spots and archivally repaired centerfold separations confined to the blank margins. Remnants of hinge tape on verso.